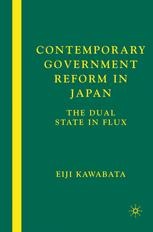 The Dual State in Flux

This book examines several major reforms in Japan - in the postal business, transportation, telecommunications and technology - and evaluates the impact of these changes since the early 1980s. Conceptually, the book presents the dual state as being a fundamental feature of the Japanese political economy that determines government reform dynamics.

'Most studies of reform in Japan have concentrated on reasons for failure. Kawabata usefully points out that there have been successes, and he compares across sectors to figure out the causes of variation in degrees of success. The key factor is differences in the complicated interactions between the developmental and distributional components of Japanese governance. What makes his analysis convincing are the detailed longitudinal analyses of domestic transportation, telecommunications, and the post-office business.'

of Michigan"The Japanese state has all too often been depicted as something of a chimera by western observers - feared as an omniscient and omnipotent leviathan in the era of rapid economic growth, but mocked as an ailing dinosaur in more recent times of downturn and stagnation. Professor Kawabata offers a lucid analysis of the complex reality with a single, consistent explanation based on the concept of the dual state. Japan's mixed record of government reform in the key fields of telecommunications, transportation, and postal services, is brilliantly accounted for through a focus on the dynamics in and between the policy networks of development and distribution. This book would be of interest to all academics, policy-makers, and business leaders who want to make sense of contemporary Japanese political economy."

- Koichi Nakano, Sophia University (Tokyo)'Contemporary Government Reform in Japan provides a fascinating account of the process of economic reform in Japan. It starts out with a comparative and historical framework that will draw in the novice to Japanese political economy, while rich case studies of the postal, transportation and telecommunications sectors make the book essential reading for experts. Kawabata's careful research and insightful analysis do much to illuminate the often murky causes of current changes in the Japanese economy.'

- Mark Tilton, Associate Professor, Department of Political Science, Purdue University"Critics in both journalism and the academic worlds have scored thegovernment's economic reforms to lift Japan out of its long recession as 'too little, too late' and political scientists have tended to emphasize either the bureaucrats in control [and at fault] or the politicians. Yet there has been some progress and successes and both bureaucrats and politicians have played a major role in both. Refreshingly, Eiji Kawabata's Contemporary Government Reform in Japansees the glass as neither half empty nor half full but both - he objectively dissects the failures and successes of the Japanese government's reform efforts in telecommunications, transportation and the postal business, three of the most important yet relatively unexamined sectors in the reform push. He does this with a sophisticated empirical analysis of the interaction of political and bureaucratic actors in these sectors and with an interesting approach that demonstrates how Japan's "dual state" of developmental and distributive networks composed of both kinds of actors produced some moderate successes and some moderate failures. This is one of the most realistic - and I think valid - works on Japan's political economy since the bursting of the "economic miracle" bubble." - Ellis S. Krauss, Professor, Graduate School of International Relations and Pacific Studies, University of California, San Diego"Contemporary Government Reform in Japan by Eiji Kawabata challenges stereotypical but contradictory images of the contemporary Japanese state. Kawabata's thesis is that Japanese government does, in fact, respond to reforms to make its economy more efficient and internally competitive, to reduce governmental monopolies of service, and to streamline the government. Against the unchanging images of Japan, Inc. on the one hand, and Japan as a reform-immune pork barrel state on the other comes a more nuanced picture of how Japanese government has engaged in reforms under three different governments from the 1980s to the present. The product of extensive research, Kawabata's book describes Japan as a dual state reflecting both developmental (economic growth) networks and distributive (pork barrel) networks. By examining particular sectors of reform, Kawabata is able to show the extent to which reforms had to be bargained across the bureaucracy and the degree to which party politicians intervened and affected the course, pace, and completeness of reform. In concluding, Kawabata distinguishes between neo-liberal and managed capitalist economies, noting that reform in the latter causes greater disruptions in expectations and finds more powerful institutional and constituency resistance. Despite that, Kawabata shows that Japan is not immune to reform and is hardly unchanging, and that words about reform often turn into realities. This book is a vital one not only for students of Japanese government and politics but also for those of comparative political economy, globalization, and economic and governmental reform movements. It is carefully argued, empirical yet conceptual, and well-written." - Bert A. Rockman, Professor and Head, Department of Political Science, Purdue University