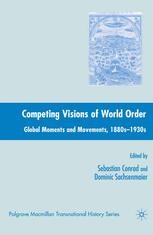 Bringing together scholars from around the world, this first book in the Palgrave Macmillan Transnational History Series raises the question of how we can get away from the contemporary language of globalization, so as to identify meaningful, global ways of defining historical events and processes in the late Nineteenth and Twentieth centuries.

"As this engaging collection of historical essays shows, the early decades of the last century were alive with intellectual debates and transnational political movements responding to Western power and expanding world markets." - Foreign Affairs

'Globalism or some might even say, a globalization paradigm is increasingly emerging as a necessary part of many historical studies even when they are focused on national or local levels. This important collection specifies the period from the late nineteenth century to World War II as one of the most important in the modern history of global interactions, not only because it was necessary to understand later developments, but because it contained several possible directions for the future that were not taken; they deserve reconsideration for the present.' - Prasenjit Duara, Professor and Chair, Department of History, University of Chicago

"A superb collection, highlighting global moments, such as the Russian-Japanese War of 1905 and the Wilsonian war after World War I, and showing in detail how they have had local along with universal consequences. The chapter authors are experts in their topics, which range from Africa to China, and combine theoretical awareness with empirical mastery. The introduction by Conrad and Sachsenmaier sets just the right tone, reminding us of the interplay of modernity and globalization and the global and the local, while binding the chapters together. A truly original contribution to global studies and the historical context in which they take place." - Bruce Mazlish, Professor of History Emeritus, MIT

"This wide-ranging volume of essays adds a long overdue historical perspective to the debates over globalization. The authors tackle topics as disparate as China and the Salvation Army, but each shows that the half-century from 1880 to 1930 was pregnant with the promise of a new system of international relations, one not circumscribed by the European experience. These essays provide a salutary reminder that competing visions of world order did indeed blossom across the globe, and that millions of ordinary individuals hoped thereby to be the architects of their own future." - Michael Auslin, Associate Professor of History, Yale University