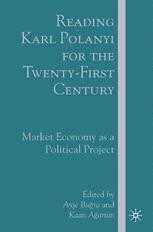 Market Economy as a Political Project

Using Karl Polanyi's analysis of the separation of politics and the economy, the book argues that the market economy is not a spontaneous process, but a 'political project' realized through institutional change where labour, land, money, and currently knowledge are commodities. The contributions explore the impact of this commodification process.

AYSE BUGRA completed her Ph.D. in economics at McGill University, UK. She is currently a professor at Ataturk Institute of Modern Turkish History and the founding director of the research center 'Social Policy Forum' at Bogazici University, Istanbul, Turkey. Her fields of specialization are History and Methodology of Economics, Development Economics, and Comparative Social Policy. Her publications include On Economics and Human Behavior (in Turkish, 1989, 1994, 2001, 2003, 2005), State and Business in Modern Turkey: A Comparative Study (1994), State, Market and Organizational Form (co-edited with Behlül Üsdiken, Walter de Gruyter, 1997), and Islam in Economic Organizations (1999). She has published articles in different edited collections and in such journals as South Atlantic Quarterly, Economics and Philosophy, International Journal of Middle Eastern Studies, Middle Eastern Studies, International Journal of Urban and Regional Research, Technological Change and Social Forecasting, Current Anthropology, Review of Radical Political Economy, MAUSS. She translated The Great Transformation by Karl Polanyi into Turkish (1986, 2000, 2003, 2005).

KAAN AGARTAN is a Ph.D. candidate in Sociology at the State University of New York at Binghamton, USA, and currently a research fellow at the research center 'Social Policy Forum' at Bogazici University, Istanbul.