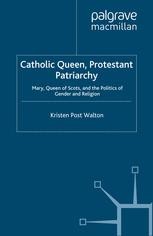 Mary Queen of Scots and the Politics of Gender and Religion

Mary Stuart is infamous for the mysteries of her reign. Mary ruled in a patriarchal society and married a subject; a Catholic queen who was the only person in her kingdom legally allowed to hear Catholic mass. These contradictions in Mary's life forced her contemporaries to search for new answers about how Scotland should be governed.

KRISTEN P. WALTON has been an Assistant Professor in the Department of History at Salisbury University since obtaining her PhD from the University of Wisconsin-Madison in 2001. Her specialization is in Tudor-Stuart British History, and she has published widely on Early Modern Britain, from the Wars of the Roses to the age of the English Civil Wars.

'An important, indispensable addition to recent studies of Mary Queen of Scots, as it examines most fully how contemporaries struggled to square Mary's gender with patriarchal notions of law, religion, and the nature of political society.' - Dale Hoak, Chancellor Professor of History, College of William& Mary

'It is now difficult to put forward an original view about Mary, Queen of Scots, but Kristen Walton has achieved just this in Catholic Queen, Protestant Patriarchy. This book explores and enhances the debate about gender and authority during Mary's personal rule in Scotland; which is sure to provoke or please readers in equal measure.' - Maureen M. Meikle, University of Sunderland

'Powerful and provocative Kristen Walton's masterful study of Mary Stuart's tenure as a regnant queen of Scotland is the kind of book that revitalizes scholarship and unsettles editors. Invaluable for any historian or literary scholar interested not only in Mary, Elizabeth, and the Reformation, but also in Anglo-Scottish relations, the later Stuarts, and the development of British political theory.' -John Watkins, Journal of British Studies