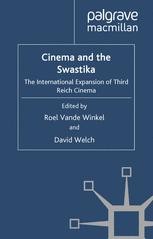 Cinema and the Swastika

This is the first publication to bring together comparative research on the international expansion of Third Reich cinema. This volume investigates various attempts to infiltrate - economically, politically and culturally - the film industries of 20 countries and regions either occupied by, friendly with or neutral towards Nazi Germany.

Winner of the 2007 Willy Haas Award for books on German cinema. For more information see the prize website: http://www.wgfilmtv.ugent.be/willyhaas_award_ENG.htm

'The crude and moralising conceptualisation of film propaganda that devalues the academic validity of so many works on Nazi film propaganda is absent. The concise contributions, providing dense and comprehensible information, form outstanding introductory texts. Detailed footnotes and references lead to further, deeper research results.'

'Cinema and the Swastika was rightfully awarded the Willy Haas Award for outstanding publication on German cinema at Cinefest 2007 in Hamburg. The contributions are stimulating, informative, and jargon-free. This book belongs in the reference collection of anyone engaged in the study of German politics, culture or film history from 1933 until 1945.' - Horst Claus, Filmblatt

'This innovative collection on the Third Reich should trigger new research. The essays are extremely informative, raising new issues about cultural imperialism and consumerism during the National Socialist era. Each essay is a precise, informative piece about the chosen country or region, introducing, indeed for the first time, film industries usually left out of Third Reich cinema studies.' - Christelle Le Faucheur, H-Net

'The papers collected in this volume offer new and diverse material invaluable as a resource to film students and historians alike, as well as being a fascinating companion to the films produced under the Third Reich. The content is extremely well presented and referenced, with an excellent index, select bibliography and black and white images illuminating film posters and historic photographs from the period. The end result is a professional and extremely interesting collection of important studies.' - Karl Birkelbach, Limina

'Cinema and the Swastika is long overdue and should prove invaluable to screen historians...The emphasis is very much on the political and economic aspects of continental cinema rather than its content. But while this may disappoint those seeking a greater insight into the exploitation and collaboration of renowned actors and directors and the calibre of the films they produced, the audacious bid for cultural hegemony attempted by the Nazis makes for consistently compelling reading....a pioneering work that seeks to inspire others to delve deeper into the operational procedures and artistic aspirations of international film-makers in the 12 years following the Nazi accession to power...the standard text on the subject.' - David Parkinson, The Oxford Times

Cinema and the Swastika breaks genuinely new ground by exploring the international expansion of the Nazi film industry, particularly during the war.' - Gerwin Strobl, War in History