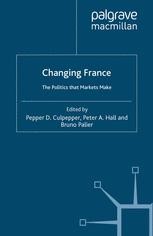 The Politics that Markets Make

How do European states adjust to international markets? Why do French governments of both left and right face a public confidence crisis? In this book, leading experts on France chart the dramatic changes that have taken place in its polity, economy and society since the 1980s and develop an analysis of social change relevant to all democracies.

'Eleven social scientists from both sides of the Atlantic have contributed to this rich, stimulating, deep, and complex assessment of the French economic and social system and of the changes that have transformed it in the past 20 years.' - Stanley Hoffmann, Foreign Affairs

'In Changing France, Culpepper et al. (2006) and their contributors tackle the difficult task of highlighting and explaining the multiple changes that have taken place in France in the past two decades, as well as taking stock of the challenges yet to come.' - Sophie Meunier, French Politics

'Looking for a synthetic overview of the major forces at play in French politics, society, and economy since 1980? Look no further than Changing France. [N]o student of contemporary France can afford to ignore reading each and every essay.' Timothy B. Smith, H-France Review

'Overall the book is to be recommended for offering good overviews, analysis, and coverage for an important area of continued public concern in France.' - David L. Cleeton, Modern and Contemporary France