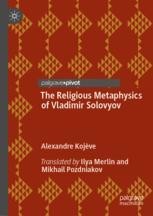 The Religious Metaphysics of Vladimir Solovyov

The original text of this work was published in the French journal Revue d’Histoire et de Philosophie Religieuses. This English translation presents Kojève’s attempt to unify the religious philosophy of Vladimir Solovyov into a metaphysical system that Solovyov strived for but was never able to fully articulate in his lifetime.

Alexandre Kojève was one of the great Hegelian philosophers of the twentieth century and a key figure in the founding of the European Union.

Ilya Merlin has a PhD from Western University’s Centre for the Study of Theory and Criticism. He specializes in intellectual history, psychoanalysis, and political theology.

Mikhail Pozdniakov has an MA in Theory and Criticism from Western University. He specializes in the philosophical history of ideas.

“This early text on Solovyov sheds light on the origins of Kojève’s thinking and thus allows an English reader to better understand one of the key figures of European intellectual history.” (Boris Groys, Global Distinguished Professor of Russian and Slavic Studies, New York University, USA)

“This short translation by Merlin and Pozdniakov is invaluable for our understanding of twentieth century philosophy and the role of Alexandre Kojève. This critical explication of Solovyov’s religious metaphysics shows Solovyov’s connections to Russian Orthodoxy as well as his profound emphasis on Sophia, or Wisdom, in philosophical and theological terms. We can see the roots of Kojève’s Russian background and certain seeds of the interpretations of Hegel that so profoundly shaped French philosophy.” (Clayton Crockett, Professor and Director of Religious Studies, University of Central Arkansas, USA)

“Here is a text by a young Kojève on the works of Vladimir Solovyov. This early philosophical piece bares traces discernible throughout his later works. The scope of this text is far reaching: from the impossibility of thinking man and being without recourse to God, the rupture of Christianity, and the isolation of man, who in some regards is bound to divinity itself.” (Juan Pablo Lucchelli, Research Associate, Université Rennes 2, France)

“In addition to making Kojève’s treatment of Solovyov’s metaphysical system available in English—of value in its own right—the translators offer a minutely observant account of Kojève’s method, offering insight into one of the twentieth century’s most influential philosophers. This volume is all the more significant for its apprehension of the ‘rhetorical peculiarities’ of Kojève’s critical exposition. Philosophy of religion stands to be enriched by such attention to style.” (Jeremy Biles, Assistant Professor, The School of the Art Institute of Chicago, USA)

“With this long-overdue, and exigent, translation of Kojève’s study, Merlin and Pozdniakov make a major contribution toward restoring an undeniable, if uneasy and conflicted, balance, with regard to the place and role of what Kojève himself called ‘religious metaphysics’(and, more simply, the ‘philosophy of religion’) in the history of twentieth-century thought and one of his most significant figures.” (Gil Anidjar, Professor and Chair, Department of Religion, Columbia University, USA)