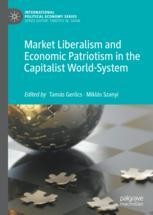 Market Liberalism and Economic Patriotism in the Capitalist World-System

This volume broadens the scope of 'comparative capitalism' within the Varieties of Capitalism (VoC) tradition. It endorses the employment of multiple perspectives, including critical political economy, institutionalist systems of capitalism, structuralist-dependency scholarship and world-systems theory. The contributors deal with the theory of economic patriotism in a conceptual framework, as well as case studies regarding rent-seeking behaviour, the patronage state in Hungary and Poland, the conflict between national regulation and the European legal framework and the perspective of wage relations in the European institutional framework. The book concludes with the legacy of developmentalism and dirigisme in a core-periphery relation, based on the French state and a range of non-European cases including Iran, Brazil and Egypt.

“This is a fascinating, rich volume that theorises and offers empirical exploration of the concept of “economic patriotism”. The authors outline two key interrelated aspects of this new regulatory regime: the intervention of the state to regulate market relations for the benefit of an economic community forming territorial or ethnic “insiders” to the nation state; and the attendant political class realignments that are produced by the new forms of the patrie. Bringing insights from a wide scope of theoretical perspectives, the authors show the attempt of different, often semi-peripheral states to regulate market relations on tension-ridden intersections of national and supranational processes. Is there any positive potential in the paradigm of economic patriotism? The stakes are very high, both as a research and as a political agenda. This volume confidently breaks the path to such endeavours. ” (Mariya Ivancheva, University of Liverpool, UK, and Editor at LeftEast)

“If your heart sinks at the prospect of yet another book on the varieties of capitalism, hold steady! This edited volume is an important corrective to that sensation. Gerőcs and Szanyi have collected around themselves a set of contributions to dispel any such responses. Rather than seeking to uncover yet another “variety”, the book focuses on economic patriotism and the challenge this lays down to existing formulations. The contributions are impressive in terms of the ambition of the geographical scope of the analysis as well as the sectoral breadth. This is political economy at its best.” (Stuart Shields, The University of Manchester, UK)

“Somewhat belatedly, the global crisis has spurned a surge in economic nationalism. The coming decades seem destined to be characterized by an uneasily shifting balance between what remains of the liberal order and emerging forms of economic nationalism. In this marvelous collection, Gerőcs and Szanyi have brought together a stimulating set of contributions ranging from theoretically interesting essays to detailed case studies, with a welcome emphasis on East and Central Europe. Worth reading for students of political economy, economic sociology and development studies. ” (Henk Overbeek, Vrije Universiteit Amsterdam, Netherlands)