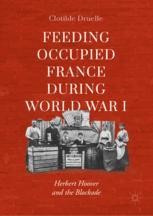 Herbert Hoover and the Blockade

This book examines the history of Herbert Hoover’s Commission for Relief in Belgium, which supplied humanitarian aid to the millions of civilians trapped behind German lines in Belgium and Northern France during World War I. Here, Clotilde Druelle focuses on the little-known work of the CRB in Northern France, crossing continents and excavating neglected archives to tell the story of daily life under Allied blockade in the region. She shows how the survival of 2.3 million French civilians came to depend upon the transnational mobilization of a new sort of diplomatic actor—the non-governmental organization. Lacking formal authority, the leaders of the CRB claimed moral authority, introducing the concepts of a “humanitarian food emergency” and “humanitarian corridors” and ushering in a new age of international relations and American hegemony.

Clotilde Druelle is Associate Professor of Contemporary History at the University of Limoges, France. She is trained as a geographer and a historian, and her work focuses on business organizations and the economic history of WWI.

“Recognizing that the fate of civilians is a vital but often neglected aspect of modern military history, Druelle recounts in her brilliant book not only the impact of World War I on occupied France and Belgium, but the genius of Herbert Hoover in organizing the complex effort to save entire populations from starvation, thereby revolutionizing international cooperation for emergency supply and transport. The lessons from this inspiring story endured through WWII and still shape contemporary humanitarian interventions.” (Senior Advisor, Jeanne Guillemin, Senior Advisor, MIT Security Studies Program, USA)

“More than two million French civilians in German-occupied northern France needed food. The Germans were responsible for them. Could international aid deliver food to French citizens without undermining the Allied blockade? The transnational effort to accomplish this feat was extraordinary. Clotilde Druelle untangles a web of diplomatic, financial and humanitarian improvisations to tell the fascinating story of the aid to France channeled through Hoover’s Commission for Relief in Belgium.” (Kenneth Mouré, Professor, University of Alberta, Canada, author of Managing the Franc Poincaré and The Gold Standard Illusion)

“After a century of historical silence on the herculean efforts to prevent starvation in German-occupied France during the First World War, Feeding Occupied France masterfully fills the void. This comprehensive account reveals humanitarianism constituted a bulwark against the threat of famine created by warring nations, naval blockade, and the perils of conquest.” (Branden Little, Associate Professor of History, Weber State University, USA)