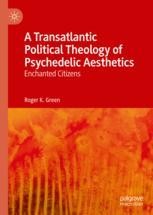 Roger Green is a lecturer in the Department of English at Metropolitan State University of Denver, USA, where he teaches English and Songwriting. He is also a working musical artist, combining literary and aesthetic ideas in sound.

“A Transatlantic Political Theology of Psychedelic Aesthetics is a timely book that seeks to shed light not only on the 1960s, but also the political machinations of today. … The book, however, really comes alive with the literary analyses, which are original and insightful, and no doubt an important contribution to the field.” (Robert Dickins, Psychedelic Book Reviews, February 10, 2020)
“Roger Green's work is a fascinating and illuminating excavation of psychedelic politics in the 20th and 21st centuries.  For Green, Psychedelic adventurers and aesthetics pre-figure a world in which individual freedom and self-realization are no longer opposed to the flourishing and enlivening of all other life forms. Psychedelic experiments do this--problematically, partially, and yet productively--by evoking and imagining, a variety of “other” cultures (past and present) and the “otherness” of nature itself.  While this evocation always risks cultural appropriation and cultural imperialism, there is nevertheless something in psychedelic self-undoing, Green argues, that can be politically generative beyond the exoticization and orientalism to which psychedelic cultures are often prone.” (Joshua Ramey, Visiting Assistant Professor of Peace, Justice, and Human Rights, Haverford College, USA)

“What is missing from our restless existence?   What magic or joy eludes us in the Empire of Capital and endless War?  Roger Green explores the rich tentacular field of entheogens in this pioneering book, defining a way into an aesthetics or reckoning with psychedelic research.  Its pitfalls, its fantasies, its European vs American praxis, the expectations, the fraught colonialism.   The sacred power and risks for the shaman.  Green’s repertoire here is vast, deeply knowledgeable, with current political, mystical, and literary insight.  This radical book conducts a stunning discourse on one of the most important investigations of our time, of any time, and most visionary: of future time and consciousness.” (Anne Waldman, co-founder of The Jack Kerouac School of Disembodied Poetics at Naropa University, USA)

“Roger Green's book is a truly remarkable, groundbreaking analysis of how Western liberal "subjectivity" was both transformed and re-configured, as well as disfigured, by the fascination with psychedelics and mind-altering substances from the 1960s onward.  Bucking the conventional wisdom that psychedelic experimentation was merely a 'counter-cultural' obsession that lasted for only a decade or so, Green mobilizes a archive of intellectual and cultural history to show how contemporary patterns of political thought can only be understood in light of this alternative, and all-too-often ignored, legacy of ideas.” (Carl Raschke, Professor of Religious Studies, University of Denver and author of Force of God: Political Theology and the Crisis of Liberal Democracy (2015))