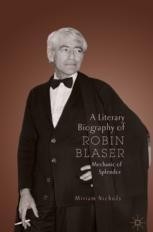 A Literary Biography of Robin Blaser

A Literary Biography of Robin Blaser: Mechanic of Splendor is the first major study illustrating Robin Blaser’s significance to North American poetry. The poet Robin Blaser (1925–2009) was an important participant in the Berkeley Renaissance of the 1950s and San Francisco poetry circles of the 1960s. The book illuminates Blaser’s distinctive responses to and relationships with familiar writers including Robert Duncan, Jack Spicer, and Charles Olson via their correspondence. Blaser contributed to the formation of the serial poem as a dominant mode in post-war New American poetry through his work and engagement with the poetry communities of the time.

Offering a new perspective on a well-known and influential period in American poetry, Miriam Nichols combines the story of Blaser’s life—coming from a mid-western conservative religious upbringing and his coming of age as a gay man in Berkeley, Boston, and San Francisco—with critical assessments of his major poems through unprecedented archival research.

This literary biography presents Blaser’s poetry and poetics in the many contexts from which it came, ranging from the Berkeley Renaissance to the Vancouver scene; from surrealism to phenomenology; from the New American poetry to the Canadian postmodern; from the homoerotic to high theory. Throughout, Blaser’s voice is heard in the excitement of his early years in Berkeley and Boston and the seriousness of the later years where he was doing most of his living in his work.

Miriam Nichols is Professor in the Department of English at the University of the Fraser Valley in Abbotsford, British Columbia where she teaches modernism, American and Canadian literature, and literary theory. Her publications include scholarly editions of Robin Blaser’s The Fire: Collected Essays and The Holy Forest: Collected Poems (2006), and a series of essays on the New American poets, Radical Affections: Essays on the Poetics of Outside (2010). She has also completed an edition of Blaser’s The Astonishment Tapes (2015), an annotated transcript of a series of autobiographical audio tapes that Blaser recorded in 1974.

“In the second half of the twentieth century, there was a golden moment for literature called ‘The New American Poetry.’ A central figure of the San Francisco branch of this national movement was poet Robin Blaser (1925-2009). Blaser thought a poem was an ‘action’ in language, a ‘performance of the real,’ and believed that poetry was a mode of knowledge, distinct from narrative, discourse and the languages of science. Now, for the first time, Blaser’s long-time editor, Miriam Nichols, tells the story of a poetry-dedicated life, and offers a lucid account of the meaning of Blaser’s intellectually charged poetry.” (Stan Persky, taught philosophy at Capilano University in North Vancouver, B.C., Canada. His most recent books are: Reading the 21st Century (2011), Post-Communist Stories (2014), and Letter from Berlin (2017))

“It took Robin Blaser awhile to get started, and he spent his twenties very much in the shadow of two ‘great companions,’ the poets Robert Duncan and Jack Spicer—but after that, he took off in unique directions, and at times exceeded them. Miriam Nichols, his friend and editor, has taken on a Herculean task with style and grace, and an almost Shakespearean gift for illuminating the souls and ambitions of her principals.” (Kevin Killian, poet, novelist, Jack Spicer scholar)

“Miriam Nichols is without doubt one of the most insightful interpreters of the New American Poetry, tracking the connections it wove, as she writes in her book Radical Affections, between the human being and ‘planetary life.’ With A Literary Biography of Robin Blaser, her nuanced and informative study of the life and work of poet Robin Blaser, our understanding of post-war poetry, and that near-mythical triumvirate Blaser formed with Robert Duncan and Jack Spicer during the San Francisco Renaissance, takes a great leap forward.” (Stephen Collis, Simon Fraser University, Canada)

“Robin Blaser stands out as one of the central figures in the San Francisco Renaissance, often linked in a trinity that included Jack Spicer and Robert Duncan. Miriam Nichols has given us a brilliant biography of a poet who lived a life of ‘astonishments’ in poetry where the real—a moth caught in piano strings—yields a new music and ultimately a new knowledge. Drawing on unpublished manuscripts, correspondence and interviews Nichols provides the first biography of this important American and Canadian poet.” (Michael Davidson, Professor Emeritus of American Literature, University of California, San Diego, USA, author of Invalid Modernism: Disability and the Missing Body of the Aesthetic (2019))

“This highly accessible biography is the first major study of Robin Blaser, a pivotal figure in North American poetry and poetics. Through extensive archival research and engaging close readings, Miriam Nichols tracks Blaser’s explorations of surrealism, the sacred, and seriality. She analyses Blaser’s navigation of mid-century sexuality and his deep enthusiasm for the visual arts. Carefully guiding the reader through his diverse career, Nichols demonstrates Blaser’s role and significance within the Berkeley Renaissance, the Boston hub of New American poetry, the Vancouver poetry scene, and Canadian literature more generally. Given Blaser’s shifts between cities, his interdisciplinary reach, and extensive network, this book provides a singularly rich and detailed insight into the distinctions and affiliations that would emerge between east and west coast, America and Canada, and North America and the United Kingdom in twentieth-century poetry.” (Ann Vickery, Associate Professor of Writing and Literature, Deakin University, Australia)

“This is a wonderful biography of a wonderful poet, full of the details of a fascinating life and its impact on the unforgettable poetry that grows out of it. A ‘New American’ poet who found new contexts for the sacred, new resources in linguistic exploration, and a new form in the ‘open space’ poem, Blaser contributed decisively to the postwar poetry scenes in San Francisco and Boston and went on to become a primary figure in Twentieth-Century Canadian poetry. Nichols is Blaser’s ideal biographer, having edited his collected poems, his collected essays, and an extensive biographical interview, The Astonishment Tapes.” (Stephen Fredman, author of Contextual Practice: Assemblage and the Erotic in Postwar Poetry and Art (2010))

“Robin Blaser was a central figure not only in the Berkeley Renaissance, but also in much of Canadian poetry since. This much-needed book brilliantly demonstrates the intricate weave of the ways in which the story of the poet’s life is inseparable from the multiple social and intellectual dimensions of a larger world. The poet’s words reach for what they can never finally grasp, passionately exploring an evolving poetic practice. Essential reading.” (Peter Quartermain, editor of The Collected Poems and Plays of Robert Duncan (2012, 2014))

“Robin Blaser, a central figure in the Berkeley Renaissance along with Robert Duncan and Jack Spicer, moved to Canada in 1966, and through his teaching and writing altered the literary landscape of postmodern Canadian poetry. Miriam Nichols’ biography—lucid, affectionate, and illuminated by her scholarly editions of Blaser’s writings, raises the standard for contemporary literary biography. Blaser’s intellectual, social, and poetic responses to the challenges of post-structuralism and neoliberalism are as vitally important today as they were during their emergence in the late twentieth century.” (Sharon Thesen, Emeritus Professor of Creative Writing, University of British Columbia, Canada)

“Critics have long recognized Robin Blaser’s importance as an innovative and visionary writer. They have known him as a giant in, first, San Francisco’s mid-century counterculture and, later, in Vancouver’s literary scene. Until now, though, we have lacked someone to teach us how best to read his verse, how to find solid purchase on a body of work that is simultaneously mystical and rigorously philosophical, at once abstractly cerebral and powerfully sensual. Miriam Nichols proves more than up to the task. She is alert to every aspect of Blaser’s craft and in command of the whole of his worldview, and, in a compelling manner, she leads readers through his life, career, and publications, following the through-lines of his developing intuitions and detailing his many poetic triumphs. A Literary Biography of Robin Blaser is a major contribution to the study of American and Canadian poetry.” (Brian Reed, Milliman Endowed Chair in the Humanities, University of Washington, Seattle, USA)

“Robin Blaser is the less-noticed genius of the circle of North American poets that includes Olson, Duncan, and Spicer. His inspired aesthetic and philosophic charms resonate throughout this work. Miriam Nichols writes Blaser’s life with loving care, consummate scholarship, and an abiding commitment to illuminate and contextualize Blaser’s astonishing poetics.” (Charles Bernstein, author of Pitch of Poetry and Attack of the Difficult Poems (2016))