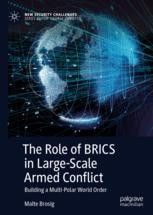 The Role of BRICS in Large-Scale Armed Conflict

This book explores how BRICS countries respond to, and get involved in, large scale armed conflict. It argues that through responding to armed conflict and deviating from the preferred Western foreign policy, BRICS countries are actively involved in building a multi-polar and post-western world order. The author develops a concise typology of response types portraying a nuanced picture of the BRICS grouping. Responses reach from non-coercive and cooperative multi-lateral behaviour reaching to neo-imperial unilateralism and military intervention. The book explains the selection of response types with reference to six variables which refer to the proximity to war, availability of power resources, the type of conflict, economic interests, the BRICS normative agenda and global humanitarian norms. Four armed conflicts in Libya, Syria, South Sudan and the Ukraine are chosen to illustrate the BRICS engagement with large scale armed conflicts.

Malte Brosig is Associate Professor in International Relations at the University of the Witwatersrand, in Johannesburg, South Africa

“The Role of BRICS in Large-Scale Armed Conflict is warmly recommended as a thoughtful contribution and critique of the BRICS in international relations.” (South African Journal of International Affairs, April 28, 2020)

“The growing importance of the BRICS grouping in global affairs has been discussed for more than a decade, but BRICS countries' role in large-scale armed conflict has not been studied systematically until now. Malte Brosig's excellent analysis successfully fills this gap, allowing us to gain a more nuanced understanding of a topic of great relevance in an increasingly multipolar world. His well-researched and clearly written book is not only essential reading for scholars studying the foreign policies of Brazil, Russia, India, China and South Africa, but also for those interested in how the international community can better address conflicts such as the ones in Libya, Syria, Ukraine and South Sudan in the coming decades.” (Oliver Stuenkel, Associate Professor of International Relations, Getulio Vargas Foundation (FGV), Brazil)

“Malte Brosig's book is timely and well-researched. There have not been many books published on this theme. BRICS being a Geo-economic group had very limited interest in Conflicts. However, this has changed considerably over the last four or five Summits. BRICS has begun to address Geo-political issues as well. Final Summit Declarations of BRICS are increasingly referring to serious ongoing conflicts around the world. The five countries have also started to coordinate their perspectives on these issues. Given the fact BRICS is not an alliance and does not even have a founding treaty, joint action seems difficult at this stage. The book brings out these nuances very clearly. It is a valuable addition to the growing literature on the different aspects of BRICS. It would prove very useful for scholars and academics doing research on the subject.” (H.H.S. Viswanathan, Distinguished Fellow, Observer Research Foundation (ORF), India)