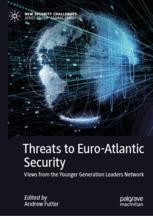 This edited volume discusses current Euro-Atlantic security issues, examining a wide range of areas including cyber threats, arms control, relations between key countries, existing conflicts and potential future flash points. It looks at both the key security challenges and responses that could be developed to mitigate these. The editor brings together perspectives from a wide range of authors from policy and academia who are part of the Younger Generation Leaders Network on Euro-Atlantic Security. This book offers a fresh perspective to these important issues from high-profile next generation leaders.

“At a time when relationships between and cooperation among nations in the Euro-Atlantic region have deteriorated to the point of crisis, a group of extraordinary young men and women have forged a new and inspiring bond centered on respect, engagement, tolerance and problem solving.  Their shared understanding that true peace and security requires work, and work requires dialogue, dissent and debate, is a model that their governments must adopt today—before crisis leads to a new and even more dangerous European conflict.” (Steven Andersen, former U.S. National Security Council)

“This volume of essays should become required reading for those with responsibility for defining the future of the Euro-Atlantic world.  The authors, all from the post -Cold War generation, have come together to grapple with that era’s legacy.  They bring to their dialog a life lived in the cyber environment, a globalized economy, an emerging Asia, and a time crying for definition of a new international order.  Their thinking, views, ways of seeing the future, and ability to engage one another offer insight about how this generation sees the issues it will face, its role in addressing them, and their hope that a more peaceful future can be achieved through the dialog, mutual respect, and focus on a shared future that they represent.  These are voices that need to be heard.” (James Collins, former US Ambassador to Russia)

“This book reflects the diversity of the authors’ perceptions of the key security challenges across the Euro-Atlantic. It is intended to challenge thinking and to reflect the experiences of the authors who represent a new generation of security leadership from across that space. For four years, in the YGLN, they have been working together in respectful dialogue with the aim of fostering positive change within their respective countries and in the wider region. These impressive young people bring a new vitality to the challenges which are defeating their elders. Their views should be compulsory reading for those who have an interest in shaping the world that they will inherit.” (Lord Desmond Browne of Ladyton, former UK Secretary of State for Defence)

‘This wonderful collection of essays by some of the rising stars of Euro-Atlantic security policy brilliantly reflects the strength and richness of the inspirational community they represent – the Younger Generation Leaders Network.  It also reflects some of the diversity of issues that this new generation of leaders will have to tackle if they are to build better security in wider Europe.  The way they have come together here makes this book a landmark.” (Sir Adam Thompson, KCMG, Director of the European Leadership Network, UK)

“This volume is a unique product by scholars and practitioners from all over the Euro-Atlantic Region and Eurasia at a time of turbulence. It started in 2014 when it was hard to have any dialogue. It was even harder to imagine that the results could be put on paper as a joint publication. The emergence of this book raises hope that a new generation is able to jointly think of the common future despite existing problems and contradictions. This generation deserves a better future than the one of the Post-Cold War and Cold War period. An ability to accept disagreements, to cooperate despite having different perceptions and to move forward in the face of severe geopolitical challenges unites the contributors to this piece, and will make it an essential resource for both academics and policy makers.” (Ivan Tomofeev, Director of Programs, Russian International Affairs Council, Russia)