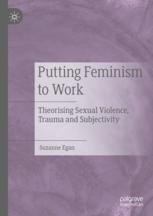 This book explores the place of feminism and uptake of trauma in contemporary work against sexual violence. Egan presents a refreshing alternative position on arguments about the co-optation or erasure of feminism within institutionalized, professionalized services for sexual assault victims. Using original research on Australian sexual assault services, Putting Feminism to Work effectively illustrates how feminist concepts and ideas have become routinized in contemporary services and enacted in daily practices with survivors and communities. The book engages with, yet resists, the notion that feminist engagement with knowledge (trauma) based in psychiatry and clinical psychology is incompatible with feminism or inevitably reduces sexual violence to a problem of individual healing. Indeed Egan argues that the productive ways practitioners integrate neurobiological understandings of trauma into their work suggests rich possibilities for reintroducing a non-essentialist biology of the body into feminist theories of sexual violence.
Scholars, students and practitioners working in the fields of violence against women, sociology, women’s and gender studies, health, social work and policy studies, as well as the emerging field of sociologically informed trauma studies, will find this book of interest.

Suzanne Egan is currently a Research Associate at the University of Sydney, Australia, and formerly undertook violence prevention research in the NGO sector.

“Suzanne Egan’s work brings the insights of practice and theory together to understand how sexual assault services think about and use feminist knowledges. This book is a careful and creative exploration of spaces beyond slogans and polarities such as ‘feminist or not’ and ‘medicalisation as oppressive.’ In illuminating the intertwined and complex lived relationships between ‘bodies, emotions, and institutions’ to enhance our responses to those who have experienced sexual assault, Egan does indeed put feminism to work with rigour and passion.”
JaneMaree Maher, Professor, Centre for Women's Studies & Gender Research, Sociology, Monash University

“This book, aptly titled, successfully counters the assertions that feminism has lost its way and declined in influence. Egan illustrates how frontline workers, service providers, academics and policy makers working in sexual assault, have utilised and built on feminist knowledges so successfully that this knowledge is now taken for granted and routinely adopted. This is a beautifully written, inspiring book that, interweaving biography, history and meticulous research, generated many ‘a ha’ moments.”
Jane Mears, Associate Professor, School of Social Sciences, Western Sydney University

“This is an immensely important book for those of us who are feminists working within the apparatus of the state. Drawing on original research data and conceptualising feminism as a form of knowledge, Egan offers a masterful scholarly challenge to conventional feminist arguments that change is possible only through subversive political action outside the state. Arguing for the robustness and adaptability of feminism, she shows how feminism has become central and authoritative in our sexual assault services and sexual assault counsellors actively and productively put ‘trauma’ to work as part of contemporary feminist practice. Breathing new life into the old feminist catch-cry that the ‘personal is political’, Egan recognises the complexity of feminist knowledge, practices and interventions challenging the status quo and supporting individuals with the embodied effects of sexual violence. In doing so, this book makes a significant contribution to feminist knowledge by legitimising institutionalised feminism as an important component of feminist efforts, political activism and commitment to gender equality and structural social change.”
Mayet Costello, policy manager in violence, abuse and neglect integration and former sexual assault counsellor