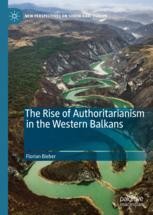 The Rise of Authoritarianism in the Western Balkans

This book explores the stagnation of democracy in the Western Balkans over the last decade. The author maps regional features of rising authoritarianism that mirror larger global trends and, in doing so, outlines the core mechanisms of authoritarian rule in the Balkans, with a particular focus on Serbia, Montenegro and Macedonia. These mechanisms include the creation of constant crises, the use of external powers to balance outside influences, as well as state capture. The authoritarian patterns exist alongside formal democratic institutions, resulting in competitive authoritarian regimes that use social polarization to retain power. As the countries of the Western Balkans aspire, at least formally, to join the European Union, authoritarianism is often informal.

“For established scholars and analysts of the Western Balkans, Bieber’s text is familiar reading. … Bieber’s book will be most enthusiastically received by those in need of a manuscript that neatly distils the existing literature, provides clear analyses of the primary drivers of authoritarian-illiberal patterns in the region, and largely steers clear of major theoretical contentions of its own. As such, Bieber’s work is to be commended, above all, for its lucidity and accessibility.” (Jasmin Mujanović, Comparative Southeast European Studies, Vol. 69 (1), 2021)
“This book is remarkably comprehensive … . The comprehensive but succinct historical narratives are, of course, replete with corrupt and self-serving local politicians, but Bieber’s analysis consistently links this domestic mendacity to the EU’s policy of, in effect, enabling the rise of political elites antipathetic to democratic principles. This book is, therefore, far more than just a collection of blinkered case-studies; its most commendable virtue is as an analysis of how the EU has fundamentally compromised its own professed ideals.” (Aidan Hehir, International Affairs, Vol. 96 (6), 2020)
“It provides a new and fresh insight into the recent occurrences in the region, stimulates discussion of these complex processes, and offers a thought-provoking and well-documented analysis of processes even in academically marginal parts of Europe (Montenegro and North Macedonia). This interesting and engaging volume is an essential read for scholars in political science and college students, as well as for the policy makers and journalists whose work is focused on the Western Balkans.” (Ana Radović Kapor, Međunarodne studije, Vol. 18 (1-2), 2018)
“When it comes to Balkan politics, Florian Bieber’s book touches a raw nerve. It is an absolute must-read for scholars of the region. Students of comparative democratization and authoritarianism have much to learn from it just as well.” (Dimitar Bechev, University of North Carolina at Chapel Hill, USA)

“This excellent new book will very quickly become the definitive text for scholars and students of South East Europe and the Western Balkans. It will also be invaluable for those with an interest in the revival and survival of authoritarian states globally. Bieber provides incisive analysis based on extensive knowledge of a region that he has studied and meticulously observed for nearly three decades. A must read.” (Adam Fagan, King’s College London, UK)