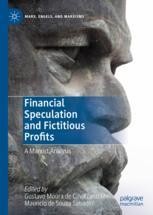 This book provides an original account of financialisation and outlines the creation of fictitious profits as a basis to describe the present phase of capitalist accumulation in the neoliberal era. Making innovative theoretical elaborations on Marx’s notion of fictitious capital, Financial Speculation and Fictitious Profits offers a dialectic analysis of the increasing financialization during this crisis-ridden period based on the original concepts of fictitious profit and fictitious wealth. Combining the most important research from over twenty years of scholarly inquiry with groundbreaking new studies, Financial Speculation and Fictitious Profits is more than a collection of texts by political economists on a contemporary topic; it is a synthesis of an intense process of academic production that began with work of Karl Marx and has resulted in the formulation of a differentiated interpretative perspective on the contemporary evolution of capitalist crisis.

Gustavo Moura de Cavalcanti Mello is Professor in the Department of Economics and the Post-Graduate Programme in Social Policy at the Federal University of Espírito Santo, Brazil

Mauricio de Souza Sabadini is Professor in the Department of Economics and the Post-Graduate Programme in Social Policy at the Federal University of Espírito Santo, Brazil

“This book offers a wide-ranging critique of contemporary political economy grounded in the work of Karl Marx. The contributions focus on value, money, finance and financialisation, and their transformations under neoliberalism. Financial Speculation and Fictitious Profits is a refreshing and original perspective which will inform debates within Marxist Political Economy for many years. Scholars and students will find here a treasure trove of materials to be examined, discussed and developed: a truly valuable contribution to Marxist debates!” (Alfredo Saad Filho, Professor of Political Economy, SOAS University of London, UK)

“This collection of essays is a timely intervention at this contemporary stage of predatory capitalism, with fictitious capital dominating economy and society. A refreshed understanding of the nature of fictitious capital in both its historical evolution and contemporary forms is necessary for the search for alternatives to end its tyranny and for a new chapter of humanity to unfold.” (Lau Kin Chi, Professor, Lingnan University, Hong Kong)

“The distinguishing feature of today’s post-industrial evolution into finance capitalism is fictitious capital—that is, finance capital on the liabilities (debt) side of the balance sheet taking over economic management from industry and also from government. The chapters in this book provide a much-needed background to see the extent to which financial engineering has replaced industrial engineering as the key to rising ‘wealth.’” (Michael Hudson, Professor of Economics at the University of Missouri–Kansas City, and Researcher at the Levy Economics Institute at Bard College, USA)

“The destructive march of capital makes it imperative to systematically study the Marxian critique of political economy. In undertaking this task, throughout the chapters that compose this work the authors offer us relevant contributions to a critical interpretation of contemporary capitalism, especially through a careful and original analysis of the fictitious forms of capital.” (Wen Tiejun, Professor of Economics at Fujian Agriculture & Forestry University, China)

“The theory of fictitious capital belongs only to Marx. Yet curiously, despite its centrality in the working of capitalism since the turn of the 21st century and its role in the 2008 financial crisis, it has remained an extremely unresearched domain of Marxist scholarship. The two decades of work from economists at the Federal University of Espirito Santo has been a notable exception, and this book brings it finally to Anglophone researchers.” (François Chesnais, Professor Emeritus, University of Paris XIII, France)