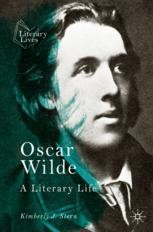 Oscar Wilde: A Literary Life tracks the intellectual biography of one of the most influential minds of the nineteenth century. Rather than focusing on the dramatic events of Wilde’s life, this volume documents Wilde’s impressive forays into education, religion, science, philosophy, and social reform. In so doing, it provides an accessible and yet detailed account that reflects Wilde’s own commitment to the “contemplative life.” Suitable for seasoned readers as well as those new to the study of his work, Oscar Wilde: A Literary Life brings Wilde’s intellectual investments into sharp focus, while placing him within a cultural landscape that was always evolving and often fraught with contradiction.

Kimberly J. Stern is Assistant Professor of English and Comparative Literature at the University of North Carolina at Chapel Hill, USA. She is the editor of a Broadview edition of Oscar Wilde’s Salomé (2015) and author of The Social Life of Criticism: Gender, Criticism, and the Politics of Belonging (2016).

“Stern reveals the overlooked significance of Wilde’s encounters with multidisciplinary periodical literature and surveys his considerable contribution to fin de siècle periodical culture. … his influence upon periodical culture was equally significant and deserving of study by both scholars and enthusiasts.” (Rebecca Nesvet, Victorian Periodicals Review, Vol. 53 (2), 2020)

“Oscar Wilde: A Literary Life is a well-researched, well written account of Wilde’s intellectual life and how he thought. readers will, though, enjoy stern’s study to the fullest if they come to it with a thoroughgoing knowledge of what Wilde thought, by close acquaintance with his works and by having already read a more traditional kind of biography.” (Aaron Eames, The Wildean, July, 2020)

“A welcome assessment of key elements in Wilde's intellectual make-up. The Wilde who emerges is first and foremost a thinker. Stern is particularly illuminating on the scientific and philosophical underpinnings of Wilde's thought, as well as his ambivalence towards philosophical discourse as such.” (Nicholas Frankel, Professor of English, Virginia Commonwealth University, USA, and author of Oscar Wilde's Decorated Books and Oscar Wilde: The Unrepentant Years (2017))
“There has long been a need for an intellectual biography of Oscar Wilde, a need addressed with great aplomb by Professor Stern’s book. With impressive scholarship and sensitivity she explores Wilde’s complex and fluid engagements with the fields of biography, education, religion, science, philosophy and politics throughout his career, in a work that both undergraduates and long-time scholars of Wilde will find equally illuminating.” (Dr. Iain Ross, author of Oscar Wilde and Ancient Greece (2012))