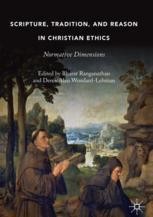 How should we understand the relationship between Christian ethics and religious ethics? Among comparative, ethnographic, and normative methodologies? Between confessional and non-confessional orientations, or between theology and philosophy? This volume brings together emerging religious ethicists to engage the normative dimensions of Christian ethics. Focusing on scripture, tradition, and reason, the contributors to this volume argue for a vision of Christian ethics as religious ethics. Toward this end, they engage with scripture, interpretation, and religious practice; examine the putative divide between reason and tradition, autonomy and heteronomy; and offer proposals about the normative characterization of conceptual and practical issues in contemporary religious ethics. Collectively, the volume engages Christian thought to make an argument for the continuing relevance of normative methodologies in contemporary religious and theological ethics.

Derek Woodard-Lehman is Lecturer in the Department of Theology and Religion at the University of Otago, New Zealand, where he also serves as the Wellington Programme Coordinator for the Centre for Theology and Public Issues.

“What is the relationship between Christian ethics and religious ethics?  This is a presently urgent and perennially important issue for both kinds of scholarship, but one that few have directly engaged.  Ranganathan and Woodard-Lehman’s Scripture, Tradition and Reason in Christian Ethics explores this topic with seriousness and rigor; it assembles a remarkably diverse group of young scholars to think about this question, with impressive results.  Ranging widely across topics and figures, the collection will be very useful for scholars and in classes on Christian ethics and religious ethics.” (Charles Mathewes, Professor of Religious Studies, University of Virginia, USA)

“At a time when few assumptions can be made about what precisely is denominated by the adjective “religious,” and about what distinguishes religious insiders from religious outsiders, this band of emerging scholars has stepped into the breach to redraw the lines of debate over religious ethics.  Complementing recent descriptive and comparative initiatives, they stake out a place for Christian ethics within religious ethics.  Along the way, they unsettle several widespread assumptions:  Both Christians and non-Christians, they argue, can engage in Christian ethics, as it takes confessional and non-confessional forms.  Scholars do not lose their credibility when they engage in first-personal normative judgments.  Refraining from such assessments does not preserve scholarship from complicity with Western Christian hegemony.  An invigorating read, this volume heralds a bright new day for religious ethics.” (Jennifer A. Herdt, Senior Associate Dean of Academic Affairs and Gilbert L. Stark Professor of Christian Ethics, Yale Divinity School, USA)

“Showcasing the work of emerging scholars in the field, this important volume demonstrates that Christian ethics can engage with religious ethics while also upholding its commitment to normative inquiry. It not only bridges the divide between Christian ethics and religious ethics; it also shows how each enterprise can benefit from the other. I heartily recommend it to students and scholars in both fields.” (Gerald McKenny, Walter Professor of Theology, University of Notre Dame, USA)