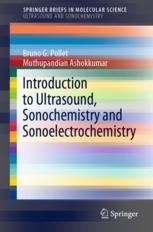 Introduction to Ultrasound, Sonochemistry and Sonoelectrochemistry

This book provides an introduction to the fundamental and applied aspects of sonochemistry, discussing a number of basic concepts in sonochemistry, such as how ultrasonic waves interact with gas bubbles in liquids to generate cavitation, and how the high temperatures generated within cavitation bubbles could be estimated. It explains how redox radicals are produced and how to make use of both the physical and chemical forces generated during cavitation for various applications. Intended for academic researchers, industry professionals as well as undergraduate and graduate students, especially those starting on a new research topic or those new to the field, it provides a clear understanding of the concepts and methodologies involved in ultrasonic and sonochemistry.

Bruno G. Pollet is a full Professor of Renewable Energy at the Norwegian University of Science and Technology (NTNU) in Trondheim. He is a Fellow of the Royal Society of Chemistry (RSC), an Executive Editor of Ultrasonics Soncohemistry and a Board of Directors´ member of the International Association of Hydrogen Energy (IAHE). He held Visiting Professorships at the University of Ulster, Professor Molkov’s HySAFER (UK) and at the University of Yamanashi, Professor Watanabe’s labs (Japan). His research covers a wide range of areas in Electrochemical Engineering, Electrochemical Energy Conversion and Sono-electrochemistry (Power Ultrasound in Electrochemistry) from the development of novel materials, hydrogen & fuel cell to water treatment/disinfection demonstrators & prototypes. He was a full Professor of Energy Materials and Systems at the University of the Western Cape (South Africa) and R&D Director of the National Hydrogen South Africa (HySA) Systems Competence Centre. He was also a Research Fellow and Lecturer in Chemical Engineering at The University of Birmingham (UK) as well as a co-founder and an Associate Director of The University of Birmingham Centre for Hydrogen and Fuel Cell Research. He has worked for Johnson Matthey Fuel Cells Ltd (UK) and other various industries worldwide as Technical Account Manager, Project Manager, Research Manager, R&D Director, Head of R&D and Chief Technology Officer. He was awarded a Diploma in Chemistry and Material Sciences from the Université Joseph Fourier (Grenoble, France), a BSc (Hons) in Applied Chemistry from Coventry University (UK) and an MSc in Analytical Chemistry from The University of Aberdeen (UK). He also gained his PhD in Physical Chemistry in the field of Electrochemistry and Sonochemistry under the supervision of Professors J. Phil Lorimer & Tim J. Mason at the Sonochemistry Centre of Excellence, Coventry University (UK). He undertook his PostDoc in Electrocatalysis at the Liverpool University Electrochemistry group led by Professor David J. Schiffrin. Bruno has published many scientific publications, articles, book chapters and books in the field of Sonoelectrochemistry, Fuel Cells, Electrocatalysis and Electrochemical Engineering. Bruno is member of editorial board journals (International Journal of Hydrogen Energy/Electrocatalysis/Ultrasonics Sonochemistry/Renewables-Wind, Water and Solar/Electrochem). He is also fluent in English, French and Spanish. Current Editorships: Hydrogen Energy and Fuel Cells Primers Series (AP, Elsevier) and Ultrasound and Sonochemistry (Springer).

Professor Muthupandian Ashokkumar (Ashok) is a Physical Chemist who specializes in Sonochemistry, teaches undergraduate and postgraduate Chemistry and is a senior academic staff member of the School of Chemistry, University of Melbourne. Ashok is a renowned sonochemist, with more than 20 years of experience in this field, and has developed a number of novel techniques to characterize acoustic cavitation bubbles and has made major contributions of applied sonochemistry to the Materials, Food and Dairy industry. His research team has developed a novel ultrasonic processing technology for improving the functional properties of dairy ingredients. Recent research also involves the ultrasonic synthesis of functional nano- and biomaterials that can be used in energy production, environmental remediation and diagnostic and therapeutic medicine. He is the Deputy Director of an Australian Research Council Funded Industry Transformation Research Hub and leading the Encapsulation project. He has received about $ 15 million research grants to support his research work that includes several industry projects. He is the Editor-in-Chief of Ultrasonics Sonochemistry, an international journal devoted to sonochemistry research with a Journal Impact Factor of 4.3). He has edited/co-edited several books and special issues for journals; published ~360 refereed papers (H-Index: 49) in high impact international journals and books; and delivered over 150 invited/keynote/plenary lectures at international conferences and academic institutions. Ashok has successfully organised 10 national/international scientific conferences/workshops and managed a number of national and international competitive research grants. He has served on a number of University of Melbourne management committees and scientific advisory boards of external scientific organizations. Ashok is the recipient of several prizes, awards and fellowships, including the Grimwade Prize in Industrial Chemistry. He is a Fellow of the RACI since 2007.