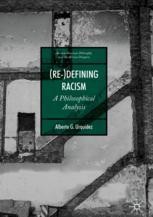 What is racism? is a timely question that is hotly contested in the philosophy of race. Yet disagreement about racism’s nature does not begin in philosophy, but in the sociopolitical domain. Alberto G. Urquidez argues that philosophers of race have failed to pay sufficient attention to the practical considerations that prompt the question “What is racism?” Most theorists assume that “racism” signifies a language-independent phenomenon that needs to be “discovered” by the relevant science or “uncovered” by close scrutiny of everyday usage of this term. (Re-)Defining Racism challenges this metaphysical paradigm. Urquidez develops a Wittgenstein-inspired framework that illuminates the use of terms like “definition,” “meaning,” “explanation of meaning,” and “disagreement,” for the analysis of contested normative concepts. These elucidations reveal that providing a definition of “racism” amounts to recommending a form of moral representation—a rule for the correct use of “racism.” As definitional recommendations must be justified on pragmatic grounds, Urquidez takes as a starting point for justification the interests of racism's historical victims.

“This is the most important book-length philosophical analysis of racism yet. Its critiques of others' thought are incisive, and its own original theorizing is creative and full of imagination. Urquidez writes with intelligence, precision, and depth. In a time when careful thinking about racism is so important, this much-needed contribution weaves the conventional and the revisionist, philosophy of language and victims' perspective, apriori methodology and the needs of the oppressed, into a complex explanatory tapestry. Even those of us who disagree with Urquidez's main contentions see that no future philosophizing about racism can dare to ignore this rich and original work.” (Jorge L. A. Garcia, Professor of Philosophy, Boston College, USA)

“Alberto Urquidez’s (Re-)Defining Racism: A Philosophical Analysis is without doubt a comprehensive critical working through of recent work in analytic philosophy of race.  Urquidez breaks with tradition in that he does not frame his project as one in applied social and political philosophy.  Instead, he directly locates his critical project within analytic philosophy of language.  To this end, he argues that philosophical definitions of ‘racism’ are not descriptions of (an ontological) reality and that, consequently, any attempted metaphysical analysis of ‘racism’ presupposes a flawed approach to the definition of concepts.  Following Wittgenstein, Urquidez defends a view that he calls conventionalism, namely, the thesis that ‘definitions of racism and other explanations of this term are expressions of norms and, specifically, of linguistic norms.’ This book is necessary reading for anyone who seeks to become knowledgeable about the relationship between philosophy of race and analytic philosophy of language.” (Clevis R. Headley, Associate Professor of Philosophy, Florida Atlantic University, USA)