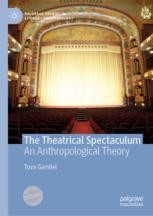 This book offers a new mythic perspective on the secret of the allure and survival of a current-archaic institution—the Western theatre—in an era of diverse technological media. Central to the theory is the spectaculum—a stage “world” that mirrors a monotheistic cosmic order.

Tova Gamliel here not only alerts the reader to the possibility of the spectaculum’s existence, but also illuminates its various structural dimensions: the cosmological, ritual, and sociological. Its cosmo-logical meaning is a Judeo-Christian monotheistic consciousness of non-randomness, an exemplary order of the world that the senses perceive. The ritual meaning denotes the centrality of the spectaculum, as the theatre repeatedly reenacts the mythical and paradigmatic event of Biblical revelation. Its social meaning concerns any charismatic social theory that is anchored in the epitomic structure of social sovereignty—stage and audience—that the Western theatre advances in an era characterized by hypermedia.

Tova Gamliel is Professor of Anthropology at Bar-Ilan University, Israel. Her research is grounded in existential and psychological anthropology. She is the author of Old Age with a Gleam in the Eyes (2000, Hebrew), End of Story: Meaning, Identity, Old Age (2005, Hebrew), Aesthetics of Sorrow: The Wailing Culture of Yemenite Jewish Women (2014), and Zahara's Diaries: A Feminine Invitation to Anthropology (2014, Hebrew).

“With a literary flair and intellectual thrust Tova Gamliel opens a secret door as she ushers us to take a seat in the upper circle of the theatre of theatres—the spectaculum. The sacred space of theatre casts a spell on both audience and actors who share a cosmological aura that envelops the experience. This is a revelatory moment that emanates from the inimitable drama of “seeing the voices” as resounded in the revelation of Sinai that inspires and constitutes the Judeo-Christian epoch of theatre. Gamliel summons variegated fields of knowledge to invite the dumbfounded reader to a hall of mirrors of illusions and allusions that is both mesmerizing and tantalizing to the extent of immersed discontent and wondrous commitment to the deceitful truth of the spectacle. Gamliel’s unique book is a literary masterpiece of theatrical art in its own right. Reading it is a key for theatre going which is second to none.” (Haim Hazan, Professor Emeritus, Departmetn of Sociology and Anthropology, Tel Aviv University, Israel)

“What follows is an anthropological essay … written in a layered, complex, archeological prose that is Jamesian … The effect of Gamliel’s intimate, subtle, implicative prose is to create a sense of the ultimate, of transcendence and its secular mystery, of a deep layer of sensation and metaphysical awareness underneath the prose. Not just actors but theatrical writers, directors, and technical staff aim to allow audiences to experience transcendence as if they were in the traditional world of the ancient Jews who received the Godly revelation on Mount Sanai. The Ten Commandments, the ethical backdrop of western civilization, could never have passed to posterity if God had not scripted and Moses had not directed the sacral presence … One can become alienated from a theatrical text, but not from the experience of theatre. This is why the ethical survives at the center of drama, no matter postmodern critique.” (Jeffrey Alexander, Lillian Chavenson Saden Professor of Sociology, Yale University, USA)