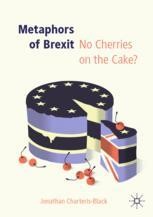 No Cherries on the Cake?

How were social media posts, scripted speeches, traditional news media and political cartoons used and understood during the Brexit campaign? What phrases and metaphors were key during and after the 2016 Brexit referendum? How far did the Remain and Leave campaigns rely on metaphor to engage with supporters in communicating their political positions? These questions, and many others, can be answered only through a systematic analysis of the actual language used in relation to Brexit by the different parties involved. By drawing on a range of data sources and types of communication, and presenting them as 'frames' through which individuals can attempt to understand the world, the author provides the first book-length examination of the metaphors of Brexit. This book takes a detailed look at the rhetorical language behind one of the major political events of the era, and it will be of interest to students and scholars of linguistics and political science, as well as anyone with a special interest in metaphor, rhetoric, Brexit, or political communication more broadly.

Jonathan Charteris-Black is Professor of Linguistics at the University of the West of England, UK. His research interests are metaphor, rhetoric and political discourse.

“From backstops and divorce bills to red lines and emergency brakes, so much of the debate on Brexit has been conducted through metaphor. Jonathan Charteris-Black shines a bright light through this metaphorical mist, highlighting the power and consequences of metaphor in this entertaining and insightful volume. Essential reading for anyone working in political communication.” (Simon Lancaster, Speechwriter and Author)

“In this timely monograph, the author applies his Critical Metaphor Analysis approach with masterly skill to the jargon of Brexit and the Brexit debate. The frames, myths, scripts and arguments for and against Britain's withdrawal from the EU are revealed as parts of a large contest to tell 'the best story' about national identity and political experience.” (Andreas Musolff, Professor of Intercultural Communication, University of East Anglia, UK)

“Jonathan Charteris-Black’s new book offers an insightful investigation into the metaphors in public debates over Brexit. He demonstrates, using his method of Critical Metaphor Analysis, how metaphorical ideas about Brexit are clearly motivated by different ideologies that both create and reinforce political and cultural beliefs within the United Kingdom. Readers will appreciate the many complexities of Brexit and enjoy the ingenuity, humor, and pathos of its fascinating metaphors. The book is an ideal example of applied metaphor theory in action.” (Raymond W. Gibbs Jr., Emeritus Professor of Psychology, University of California, Santa Cruz, USA)

Book Title
Metaphors of Brexit
Book Subtitle
No Cherries on the Cake?
Authors
Copyright
2019
Publisher
Palgrave Macmillan
Copyright Holder
The Editor(s) (if applicable) and The Author(s)