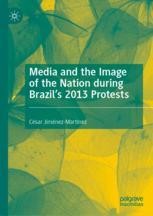 This book explores the struggles over the mediated construction and projection of the image of the nation at times of social unrest. Focussing on the June 2013 protests in Brazil, it examines how different actors –authorities, activists, the national media, foreign correspondents– disseminated competing versions of ‘what Brazil was’ during that pivotal episode. The book offers a fresh conceptual approach, supported by media coverage analysis and original interviews, that demonstrates the potential of digital media to challenge power structures and establish new ways of representing the nation. It also highlights the vulnerability of both ‘old’ and ‘new’ media to forms of inequality and disruption due to political interferences, technological constraints, and continuing commercial pressures. Contributing to the study of media and the nation as well as media and social movements, the author throws into sharp relief the profound transformation of mediated nationhood in a digital and global media environment.

César Jiménez-Martínez is Lecturer in Global Media and Communications at Cardiff University, UK. His research interests include media and nationalism, nation branding and public diplomacy, media globalisation, media visibility, and social movements, particularly in the context of Latin America.

“This book analyses processes of construction, dispute and transformation of mediated visibility, based on the case study of the June 2013 wave of protests in Brazil. Based on content analysis of mainly news productions of the period and interviews with several social actors, interested and active in the (re) construction of Brazil's image, the author conducts reflections that discuss the nation's visibility, strategies and conditions of mediation of that visibility. The book brings relevant discussions about the dynamics of contemporary journalism and the power relations in this field.” (Dr. Ana Suzina, Loughborough University London)

“All in all, Media and the Image of the Nation is a fascinating reading. And not only for those seeking to understand what went down in Brazil when ‘The Protester’ made it there in 2013. It will appeal to anyone who has an interest in how different social actors compete within an increasingly complex mediatic environment over which stories to tell in order to shape or reshape an image of us as a collective, of our history and, ultimately, of what binds us together as a group – if anything.” (Pedro Branco, University of Brasilia)

“The book contributes by showing the many narratives that emerged after the 2013 protests, while confirming the central role of the mainstream media in building up expectations about the demonstrations. Taken together, the opinions of journalists about the protests, the content published in the press and the media climate depicted indicate a far more pragmatic reality. The book advances the debate on the mediatisation of protests by allowing each participant to show their own interests, which eventually turned the protests into a grand media event. As a result, what arguably began as student outrage over the cost of a bus ticket became a showcase of contradictions. The retreat of the protests, nonetheless, goes on in the record as part of a narrative of unaccomplished democratic goals.” (Dr. Helton Levy, LSE Review of Books)

“Jimenez Martinez has produced a highly readable, in-depth analysis of mediated nationhood in contemporary Brazil. Drawing from a rich body of original research, the book persuasively shows that the mediated process of nationhood is contested, with unpredictable consequences. It is not firmly controlled by the State or any other actor, particularly in societies with huge social disparities and political conflict. The meaning of nationhood is essentially unstable, as actors contend to (de)redefine its response to the actions of others. This book should be of great interest to scholars of media, journalism, and nationalism.” (Silvio Waisbord, Professor in the School of Media and Public Affairs at the George Washington University, USA)

“Jiménez-Martínez’s book provides a rich, nuanced view about the Brazilian ‘June Journeys’, a puzzling political phenomenon, and the disputes about the event’s meaning, involving the government, protesters, the mainstream and the alternative media. A must-read book.” (Afonso de Albuquerque, Professor of Cultural Studies and Media, Universidade Federal Fluminense, Brazil)

“This book is an original, thoughtful and incisive contribution to the literature around the mediation of national identity and protests. It engages very effectively with various theoretical frameworks, shows an admirable grasp of recent research and makes excellent use of empirical investigation to tell the story of how the mediation of the June Journeys unfolded.” (Tim Markham, Professor of Journalism and Media, Birkbeck, University of London, UK)

“The Brazilian 2013 June protests have had a profound impact on the nation’s contemporary history and political life. Jiménez-Martínez provides here an in-depth engagement with the June Journeys by conducting extensive research on how the nation was constructed in the national and international media, analysing 797 newspaper articles and TV reports and conducting sixty-four interviews. This book is theoretically dense and innovative, destined to contribute to research on nation-building and the role of media in democratisation processes.” (Carolina Matos, Senior Lecturer in Sociology and Media, City, University of London, UK)

Book Title
Media and the Image of the Nation during Brazil’s 2013 Protests
Authors
Copyright
2020
Publisher
Palgrave Macmillan
Copyright Holder
The Editor(s) (if applicable) and The Author(s), under exclusive license to Springer Nature Switzerland AG