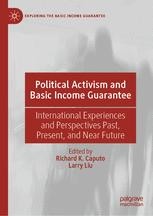 International Experiences and Perspectives Past, Present, and Near Future

This edited volume brings together international and national scholars and major activists leading or spearheading basic income guarantee political initiatives in their respective countries. Contributing authors address specific issues about major efforts to influence public policy regarding basic income guarantee, such as: who were the main advocates and thought leaders involved in support of such legislative initiatives; what were the main organizational and framing strategies and tactics used to influence public opinion and elected officials to support the idea of and policies related to basic income guarantee; what were the major obstacles they faced; and what practical and theoretical lessons might be learned from past and contemporary actions to affect social policy change regarding basic income guarantee and related measures to guide the efforts of activists and public intellectuals in the 2020 and 2024 election cycles.

Richard K. Caputo is Professor Emeritus of Social Policy and Research at Wurzweiler School of Social Work, Yeshiva University, USA. In addition to many peer-reviewed journal articles, he has authored seven books, including Connecting the Dots: A Social Work Academician’s Memoir of Intellectual and Career Development, Policy Analysis for Social Workers , and U.S. Social Welfare Reform: Policy Transitions from 1981 to the Present. He has also edited two other books, including a predecessor to this volume, Basic Income Guarantee and Politics: International Experiences and Perspectives on the Viability of Income Guarantee. He has served on the editorial boards of the Journal of Sociology and Social Welfare, the Journal of Poverty, Marriage and Family Review, the Journal of Family and Economic Issues, Race, Gender & Class, and Families in Society, which recently acknowledged his longstanding service by establishing the Richard K. Caputo Reviewer Award. In 2016, he was named a Mentor Recognition Honoree by the Council on Social Work Education. He also held faculty positions at the University of Pennsylvania and Barry University.

Larry Liu is Doctoral Student in the Department of Sociology at Princeton University, USA. His research interests involve labor, economic, political and historical sociology, including the politics of universal basic income, the discourses on and explanations for the automation of work. He has published work on the destruction of the iron rice bowl in China and institutional determinants of sovereign debt in Italy and Japan. He has forthcoming work on pension fund shareholders’ effects on labor outcomes, unionization effect on automation and immigrant presence on automation.