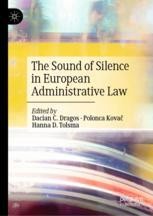 The Sound of Silence in European Administrative Law

This book examines administrative silence in a comparative manner in the EU law and 13 jurisdictions from Europe. Administrative silence is an issue that lies at the intersection of legal and managerial aspects of public administration, a concept that is both reflecting and testing the principles of legal certainty, legality, good administration, legitimate expectations, and effectiveness. Inactivity or excessive length of proceedings appears to be of interest for comparisons, particularly in the context of the recent attempts to develop European convergence models. The book offers in-depth insights into legal regulation, theory, case law and practice regarding positive and negative legal fictions in the selected European jurisdictions.

“According to traditional theories, administrative law is the law relating to the control of government power, its main goal is to protect an individual right, and the courts decide which contrasts to impose on administrative action. While this face of administrative law is relatively well known, another is less known, that of administrative inaction. Administrative law, when viewed in this way, requires a focus on promoting rights. It also requires shaping the very form of judicial intervention in another manner. ‘The Sound of Silence in the European Administrative Law’ helps to fill the gap that exists in legal literature, by way of a wide-ranging comparative approach, focusing on both national and EU laws. This is an interesting and important book, for both public law scholars and practitioners.”

“This new book on administrative silence, edited by Dacian Dragos, Polonca Kovač, and Hanna Tolsma, is a significant development in the literature in this area. It brings together a wide range of essays on European experiences with the problem of administrative silence, which can variously be caused by a simple error in public bodies, by administrative inertia, and sometimes even by a misuse of power. The essays develop normative and empirically-grounded points about how administrative silence is—and might be—addressed, including at the difficult interface between maladministration and illegality. The comparative dimensions to this book are as deep as they are wide, and the editors have achieved something remarkable in synthesizing the contributions and suggesting what is—and is not—possible in European law. I can think of no better or more comprehensive study of administrative silence in recent years.”

—Gordon Anthony, Professor of Public Law, School of Law at the Queen’s University in Belfast, Ireland