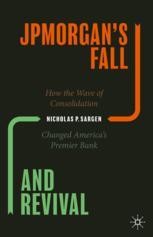 How the Wave of Consolidation Changed America’s Premier Bank

This book tells the untold story of how JPMorgan became a universal bank in the 1980s-1990s and the events leading to it being acquired by Chase in 2000. It depicts the challenges Morgan’s leaders – Lew Preston and Dennis Weatherstone – confronted when the firm’s business model was disrupted by the developing country debt crisis and premier corporate borrowers increasingly accessing capital markets, up to its current management with Jamie Dimon. It depicts what happened to Morgan in the larger story of U.S. banking consolidation.

As Morgan sought to re-enter the world of securities and navigate around Glass-Steagall barriers, their overriding goal was to ensure it would remain a pre-eminent wholesale bank serving multinational corporations.  Opportunities to grow through acquisition were presented and considered, including purchasing a stake in Citibank in the early 1990s.  However, Preston and Weatherstone were reluctant to integrate areas unfamiliar to Morgan such as retail banking or to assimilate cultures that were disparate from the firm’s.

This first-hand account explores whether Morgan could have stayed independent had its leaders pursued the strategic plan that called for it to make targeted acquisitions in areas where it had well-established businesses. Instead, in the mid-1990s, it went from being the hunter to the hunted.  Rival banks that had been burdened by bad loans to developing countries and commercial real estate capitalized on rising share prices during the tech boom to acquire other institutions.  Meanwhile, Morgan’s profits and share price lagged, which left it vulnerable.

During this time, all of the leading financial institutions struggled to change their business models.  In the end, no U.S. money center bank was able to become a universal bank on its own.  What ensued was a growing concentration of financial assets in a handful of institutions that was the precursor to the 2008 financial crisis, which is explored further using Morgan as a lens, in a book that is sure to interest banking and Wall Street professionals and business readers alike.

Nicholas P. Sargen is an international economist turned global money manager.  He has been involved in international financial markets since the early 1970s, when he began his career at the U.S. Treasury and the Federal Reserve. He subsequently worked on Wall Street for 25 years, holding senior positions with Morgan Guaranty Trust, Salomon Brothers Inc., Prudential Insurance and J.P. Morgan Private Bank. In 2003 he became Chief Investment Officer for the Western & Southern Financial Group and its affiliate, Fort Washington Investment Advisors Inc., where he now serves as an economic consultant.

Sargen has written extensively on international financial markets, and he currently produces a blog on Fort Washington’s website, where his views are updated. He appeared frequently on business television programs throughout his career on Wall Street, and was a regular panelist on Louis Rukeyser’s Wall Street Week. He was born and raised in the San Francisco Bay Area, and received a PhD in Economics from Stanford University.

“Sargen’s book is an engaging memoir, a brisk roundup of decades of banking history and a case study of management adjusting to change.” (Dean Anason, American Banker, americanbanker.com, March 31, 2021)

"In 1990 JP Morgan was the strongest and most admired New York money-center bank, while leading rivals Chase and Citi were wounded ducks. A decade later Morgan was gone as an independent bank, swallowed up by a reborn Chase. JPMorgan Chase then went on to become the world's most admired and profitable bank. Nick Sargen with great insight and poignancy lays out the bank strategies and the managerial strengths and weaknesses that drove this latest chapter in the long history of American banking."

—Richard Sylla, Chairman, Board of Trustees of the American Museum of Finance and Emeritus Professor, New York University, USA

“After an illustrious and influential past, the House of Morgan ultimately became the Morgan Guaranty Trust Company of New York, one of the finest institutions in American history.  Its disappearance in 2000 as an independent firm has fascinated and puzzled observers of the financial architecture ever since. Nick Sargen provides a fascinating and coherent mosaic of the internal issues and external pressures that led to the firm’s demise and its rebirth within the most successful of today’s megabanks.”

“Nick Sargen was both an insider and an outsider at Morgan, and has therefore written a very insightful commentary about the growth of an institution that has moved to prominence both domestically and internationally.  It is a hugely worthwhile read.”

“Nick Sargen’s book depicts the transformation in U.S. banking over the past four decades. Today, only three of the original money center banks are left: BoA was acquired by Nations Bank; Citicorp represents a mega-merger with Travelers Group; while JPMorgan Chase is the product of acquisitions by Chemical Bank which assumed their prestigious brands.  In effect, the number five bank in 1980 won the New York City sweepstakes.  The question is how it was able to do so.   Sargen illustrates how Chemical was strategic and adept at integrating diverse cultures, whereas Morgan wanted to stay a wholesale bank while retaining the culture it cherished.”

“Arriving on Wall Street in 1984, I found that every individual I met from Morgan was impressive, yet their results suggested the whole was less than the sum of the parts.  Being present at the creation of JPMorgan Chase in 2000, I experienced the merger’s time of trouble, had confidence that the new firm eventually would overcome adversity, and wasn’t surprised when it emerged to global leadership under Jamie Dimon.  Nick Sargen’s lively and clearly-told tale solves – to my great satisfaction – the mystery of how it all happened and why.”