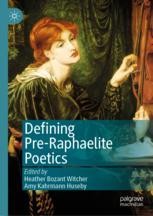 Heather Bozant Witcher is Assistant Professor at Auburn University at Montgomery, USA. Her research focuses on nineteenth-century poetics, collaboration, and sociability, as well as archival theory and digital humanities.

Amy Kahrmann Huseby is Assistant Teaching Professor at Florida International University, USA, where she teaches courses in nineteenth-century British literature. Her research focuses on nineteenth-century poetics, gender and sexuality, race and empire, and the history of science.

“This deeply exciting collection of essays settles the question whether Pre-Raphaelite poetics is a meaningful category by unsettling so many prior assumptions about Pre-Raphaelitism. The contributors forcefully demonstrate that poiesis was a central medium of Pre-Raphaelite making, a techne defined by fluidity and hybridity. In keeping with this revisionary project, the editors position Pre-Raphaelite poetics in relation to politics, sexualities, genre, form, and inter-medial relations, indicating in the process its links to Modernism.” (Linda K. Hughes, Addie Levy Professor of Literature, Texas Christian University, USA)

“This rich and wide-ranging book offers a valuable and original contribution to the field of Pre-Raphaelite studies and will appeal to scholars of Pre-Raphaelitism and nineteenth-century literature. Defining Pre-Raphaelite Poetics focuses on Pre-Raphaelite poetic form in a variety of manifestations, taking in themes of gender, politics, and aesthetics, offering fresh insights into Pre-Raphaelite poetry against a broader backdrop of literary making and production.” (Amelia Yeates, Senior Lecturer in Art History, Liverpool Hope University, UK)