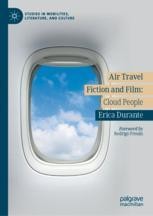 Air Travel Fiction and Film: Cloud People explores how, over the past four decades, fiction and film have transformed our perceptions and representations of contemporary air travel. Adopting an interdisciplinary approach, the book provides a comprehensive analysis of a wide range of international cultural productions, and elucidates the paradigms and narratives that constitute our current imaginary of air mobility. Erica Durante advances the hypothesis that fiction and film have converted the Airworld—the world of airplanes and airport infrastructures—into a pivotal anthropological place that is endowed with social significance and identity, suggesting that the assimilation of the sky into our cultural imaginary and lifestyle has metamorphosed human society into “Cloud People.” In its examination of the representations of air travel as an epicenter of today’s world, the book not only illustrates a novel perspective on contemporary fiction, but fills an important gap in the study of globalization within literary and film studies.

Erica Durante is Visiting Associate Professor of Latin American and Caribbean Studies at Brown University, USA. She is the author of two books, several edited books, and numerous articles in the fields of Comparative Literature and Global Studies.

“By looking at the literature and film of air-worlds, this remarkable book reinvents the scope and signifying potential of travel narratives, and sheds light on urgent questions of hypermobility and displacement. Durante’s masterful close reading of the gestures, rituals, affective gaps, and socio-economic relations that give symbolic substance to airports, hotels, airplanes, and their many in-between spaces gives rise to an insightful and original reflection on the role of fiction in the making and unmaking of the cultural imaginaries that shape the lived experience of globalization, as privileged or vulnerable passengers try and fail to form the dislocated communities where they might inscribe their contingent subjectivities.” (Mariano Siskind, Professor of Romance Languages and Literatures and of Comparative Literature, Harvard University, USA)

“Under globalization airports and their surrounding infrastructures, no longer seen as ‘non-places,’ have become instead sites where cultural, political, and identity flows come together in unexpected and inspiring forms. After reading Erica Durante’s brilliant and surprising interdisciplinary account of the Airworld, with its own spaces, politics, culture, fashions, codes of behavior, and affects; its own grandeur and miseries, a trip to the airport—on business or vacation—will never quite be the same again!” (Aníbal González, Professor of Spanish, Yale University, USA)

“We travel, fly, transit through airports, and often live in the air. Airports, airplanes, and the aerial environment are part of a phenomenology: they appear in different fashions and make things, such as the time that St. Augustine considered invisible, appear. Literary works and films are contemporary means of exposing this traveler phenomenology, which does not refer to a travel imaginary but to fascinating dynamic images. This is the brilliant argument that Erica Durante proposes in her impressive book.” (Jean Bessière, Professor Emeritus of Comparative Literature, Sorbonne Nouvelle University, France)

“It takes a keen eye and much attention to detail to see our present in its transience. In this learned book, Durante historicizes air travel, making its invisible scaffolding visible to the eye. A trove of examples from various national literatures underpins this thoughtful contribution to what, paraphrasing Gayatri Spivak, one could call ‘the frequent flying intellectual condition.’” (Héctor Hoyos, Associate Professor of Latin American Literature and Culture, Stanford University, USA)

“Erica Durante’s Air Travel Fiction and Film: Cloud People is as prudent as it is adventurous and it is as delightful as it is academic. … This is the perfect airplane reading, and Durante is the perfect pilot.” (Rodrigo Fresán, novelist)