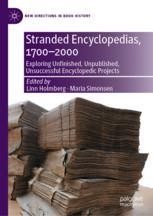 In Stranded Encyclopedias, 1700–2000: Exploring Unfinished, Unpublished, Unsuccessful Encyclopedic Projects, fourteen scholars turn to the archives to challenge the way the history of modern encyclopedism has long been told. Rather than emphasizing successful publications and famous compilers, they explore encyclopedic enterprises that somehow failed. With a combined attention to script, print, and digital cultures, the volume highlights the many challenges facing those who have pursued complete knowledge in the past three hundred years. By introducing the concepts of stranded and strandedness, it also provides an analytical framework for approaching aspects often overlooked in histories of encyclopedias, books, and learning: the unpublished, the unfinished, the incomplete, the unsuccessfully disseminated, and the no-longer-updated. By examining these aspects in a new and original way, this book will be of value to anyone interested in the history of encyclopedism and lexicography, the history of knowledge, language, and ideas, and the history of books, writing, translating, and publishing.

Chapters 1 and 4 are available open access under a Creative Commons Attribution 4.0 International License via link.springer.com.

Linn Holmberg is a Pro Futura Scientia fellow at the Swedish Collegium for Advanced Study in Uppsala, Sweden, and a researcher and teacher in History of Science and Ideas at Stockholm University, Sweden. She is the author of the award-winning dissertation The Forgotten Encyclopedia (2014) and the book The Maurists’ Unfinished Encyclopedia (2017).

Maria Simonsen is a senior researcher and teacher in Book History and History of Knowledge at Aalborg University, Denmark. She has published widely on the history of Scandinavian encyclopedias and is the author of the award-winning Den skandinaviske encyklopædi (2016).

“Stranded Encyclopedias is the first book to focus on unfinished and otherwise unsuccessful encyclopedic projects. Not only does the focus reveal a hidden and yet significant aspect of encyclopedism, but it allows us to get an unusually clear sense of the work that went into encyclopedias, since records tend to linger for unfinished projects, and to better appreciate the way they fit into lives, societies, and economic relationships.” (Jeff Loveland, Professor, University of Cincinnati, USA, and author of The European Encyclopedia (2019))

“Holmberg and Simonsen take an innovative and fascinating approach to the myriad ways in which encyclopedias can and often do fail. By bringing together a series of excellent studies on unrealized, unfinished, unpublished, and critically unappreciated works from across the Western hemisphere and spanning three centuries, Stranded Encyclopedias offers a more complete history of encyclopedic projects and a new way of framing their future.” (Seth Rudy, Associate Professor, Rhodes College, USA, and author of Literature and Encyclopedism in Enlightenment Britain (2014))

“During the Enlightenment, encyclopedias such as the Encyclopaedia Britannica and the Encyclopédie became multi-volume works seeking to encompass all knowledge. The scholarly contributions to this book reveal an intriguing parallel story: over the last three centuries many encyclopedic projects have run aground at some point before the end of the alphabet. Stranded Encyclopedias thus holds up a mirror to all encyclopedias—whose fate it is to be incomplete, even when apparently finished.” (Richard Yeo, Emeritus Professor, Griffith University, Australia, and author of Encyclopaedic Visions (2001))

“In this very original, at the same time international and diachronic study of the world’s ‘stranded encyclopedias,’ we learn that the lexicographic enterprise is so arduous and tedious that it is often difficult to bring to conclusion. Edited by Linn Holmberg, who recently discovered the abandoned dictionary of the Maurists, and Maria Simonsen, this volume reveals the great efforts, ambitions, and failures of dictionary compilers, and sheds new, exciting light on the history of intellectual work.” (Marie Leca-Tsiomis, Professor, Université Paris Nanterre, France, and author of Écrire l’Encyclopédie (1999))