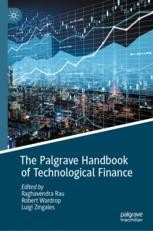 The Palgrave Handbook of Technological Finance

This handbook provides the first comprehensive overview of the fast-evolving alternative finance space and makes a timely and in-depth contribution to the literature in this area. Bringing together expert contributions in the field from both practitioners and academics, in one of the most dynamic parts of the financial sector, it provides a solid reference for this exciting discipline.

Divided into six parts, Section 1 presents a high-level overview of the technologically-enabled finance space. It also offers a historical perspective on technological finance models and outlines different business models. Section 2 analyses digital currencies including guides to bitcoins, other cryptocurrencies, and blockchains. Section 3 addresses alternative payment systems such as digital money and asset tokenization. Section 4 deals with crowdfunding models from both a theoretical perspective and from a regulatory perspective. Section 5 discusses data-driven business models and includes a discussion of neural networks and deep learning. Finally, Section 6 discusses welfare implications of the technological finance revolution.

This collection highlights the most current developments to date and the state-of-the-art in alternative finance, while also indicating areas of further potential. Acting as a roadmap for future research in this innovative and promising area of finance, this handbook is a solid reference work for academics and students whilst also appealing to industry practitioners, businesses and policy-makers.

Raghavendra Rau is the Sir Evelyn de Rothschild Professor of Finance at the Cambridge Judge Business School, University of Cambridge, UK, and a co-founder and director of the Cambridge Centre for Alternative Finance (CCAF), a research group studying new instruments and channels of finance emerging outside of the regulated banking system. He has taught at a number of universities around the world, including Université Paris Dauphine, University of Luxembourg, Sciences PO, Indian School of Business, Purdue University, University of California at Los Angeles, and most recently, the University of California at Berkeley. Raghavendra was previously Principal at Barclays Global Investors in San Francisco from 2008-2009. He is a former President of the European Finance Association, and a former editor of Financial Management.

Robert Wardrop is a Professor in Management Practice at the University of Cambridge Judge Business School, UK, and the director of the Cambridge Centre of Alternative Finance. He is an economic sociologist interested in the development of channels and instruments of finance emerging outside of the incumbent financial system and the impact of these developments on market practices and regulatory change. He is the Academic Programme Director of the CCAF’s Cambridge Fintech and Regulatory Innovation online programme which has enrolled financial services regulators in more than 100 countries.

Luigi Zingales is the McCormack Distinguished Service Professor of Entrepreneurship and Finance at the University of Chicago Booth School of Business, USA and director of the Stigler Center. In 2014 he was President of the American Finance Association. His research interests span from corporate governance to financial development, from political economy to the economic effects of culture. According to SSRN, he is the tenth most-cited author in the social sciences. His research on capitalism is summarized in two widely acclaimed books: Saving Capitalism from the Capitalists (2003, with Raghu Rajan) and A Capitalism for the People (2012). Zingales also co-hosts the podcast Capitalisn’t.