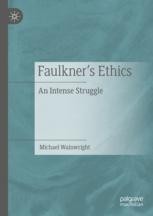 This book offers the first comprehensive investigation of ethics in the canon of William Faulkner. As the fundamental framework for its analysis of Faulkner’s fiction, this study draws on The Methods of Ethics, the magnum opus of the utilitarian philosopher Henry Sidgwick. While Faulkner’s Ethics does not claim that Faulkner read Sidgwick’s work, this book traces Faulkner’s moral sensitivity. It argues that Faulkner’s language is a moral medium that captures the ways in which people negotiate the ethical demands that life places on them. Tracing the contours of this evolving medium across six of the author’s major novels, it explores the basic precepts set out in The Methods of Ethics with the application of more recent contributions to moral philosophy, especially those of Jacques Derrida and Derek Parfit.

Michael Wainwright is an Honorary Research Associate in the Department of English at Royal Holloway, University of London, UK.

‘Michael Wainwright’s reassessment of William Faulkner’s major works in relation to the ethics of Henry Sidgwick and Jacques Derrida – with support from game theory and psychoanalysis – is original, perceptive, and timely. Wainwright provocatively refigures Faulkner’s corpus in the light of these hitherto disparate philosophical trajectories, and in doing so acquaints the philosophers with one another in ways which are lucid and suggestive. Faulkner’s Ethics represents a serious challenge to extant Faulkner scholarship.’

‘Early Faulkner criticism often followed the trajectory of Faulkner’s life, sometimes simply assuming that life had a moral compass. Later schools, for example historical materialism, sought the ‘substratum’ of material reality that underpinned the narrative, again only assuming that issues, such as the nature and economics of labor, had moral implications. Psychology, anthropology, mythology—all have had their day, often very useful days, often touching on ethical issues—but what has been lacking is ethics itself. Michael Wainwright’s Faulkner’s Ethics: An Intense Struggle will end that neglect and, I believe, spur a new interest in moral struggle, moral direction as it can be found in Faulkner’s life and literature.’