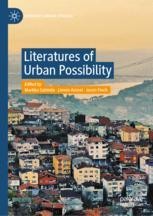 This book demonstrates how city literature addresses questions of possibility. In city literature, ideas of possibility emerge primarily through two perspectives: texts may focus on what is possible for cities, and they may present the urban environment as a site of possibility for individuals or communities. The volume combines reflections on urban possibility from a range of geographical and cultural contexts—in addition to the English-speaking world, individual chapters analyse possible cities and possible urban lives in Turkey, Israel, Finland, Germany, Russia and Sweden. Moreover, by engaging with issues such as city planning, mass housing, gentrification, informal settlements and translocal identities, the book shows imaginative literature at work outlining what possibility means in cities.

Markku Salmela is University Lecturer in English Literature at Tampere University, Finland. He is the author of Paul Auster’s Spatial Imagination (2006) and the co-editor of several volumes, including Literature and the Peripheral City (Palgrave Macmillan 2015) and Literary Second Cities (Palgrave Macmillan 2017). His current research explores mediations of the Arctic underground.

Jason Finch is Associate Professor of English Language and Literature at Åbo Akademi University, Finland. He is the author of Deep Locational Criticism (2016) and co-editor of six books. From 2019-22 he is PI for Finland in the project ‘Public Transport as Public Space in European Cities: Narrating, Experiencing, Contesting’ (PUTSPACE), funded by the European Research Council and national funding agencies via the HERA programme.

With Eric Prieto, Salmela, Ameel and Finch are co-editors of the Palgrave series Literary Urban Studies.

“The essays collected in Literatures of Urban Possibility are uncompromising in their collective assertion: the humanities hold the power to spark meaningful and lasting change regarding city planning, urbanism and the myriad forces that shape everyday urban life.” (Benjamin Fraser, editor of the Journal of Urban Cultural Studies, co-editor of the Palgrave book series Hispanic Urban Studies, and author of Toward an Urban Cultural Studies: Henri Lefebvre and the Humanities (Palgrave Macmillan 2015))