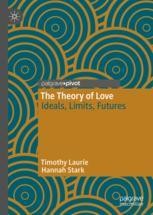 The Theory of Love

The Theory of Love: Ideals, Limits, Futures explores stories about love that recuperate a vision of intimate life as a resource for creating bonds beyond heterosexual coupledom. This book offers a variety of ethical frames through which to understand changing definitions of love, intimacy, and interdependency in the context of struggles for marriage equality and the increasing recognition of post-nuclear forms of kinship and care. It commits to these post-nuclear arrangements, while pushing beyond the false choice between a politics of collective action and the celebration of deeply personal and incommunicable pleasures. In exploring the vicissitudes of love across contemporary philosophy, politics, film, new media, and literature, The Theory of Love: Ideals, Limits, Futures develops an original post-sentimental concept of love as a way to explain emergent intimacies and affiliations beyond the binary couple.

Timothy Laurie is a Lecturer in Communications at the University of Technology Sydney, Australia, and the Managing Editor of Continuum: Journal of Media & Cultural Studies. His core research fields include cultural theory, studies in popular culture, gender and sexuality studies, and the philosophy of Gilles Deleuze. In collaboration with investigators at the University of Sydney, he is currently working on a three-year research project entitled ‘Australian Boys: Beyond the Boy Problem’ funded by the Australian Research Council.

Hannah Stark is an Associate Professor in English at the University of Tasmania, Australia. Her research interests include feminist and queer theory, philosophies of love, autotheory, the nonhuman turn, cultural engagements with extinction, and the emergence of the Anthropocene as a key conceptual framework. She is the author of Feminist Theory After Deleuze (2016), and the co-editor of Deleuze and the Non/Human (2015) and Deleuze and Guattari in the Anthropocene (2016). She is currently working on a project funded by the Australian Research Council, ‘Beyond Extinction: Reconstructing the Thylacine (Tasmanian Tiger) Archive’.