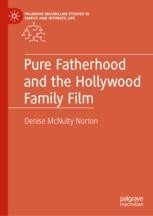 This book maps father failure and redemption through three decades of Hollywood family films, revealing how libertarian notions that align agency with autonomy lead to new conflicts for the contemporary father. The films find resolution to these conflicts through a re-gendering of parenting as relationship. In their creation of a ‘pure’ fatherhood that is valorised as authentic for its lack of parental responsibilities, the films serve to challenge the perception that fathering enacted outside the nuclear family structure is fragile. McNulty Norton finds in the films a new essentialism that secures the pure relationship to the biological father, reinforcing his position in the face of changing family forms.

Denise McNulty Norton is an independent researcher. Her research interests include the sociology of free will and the discursive construction of family.

“This is a welcome addition to the growing body of academic work on the important yet under-studied area of mediated fatherhood, and within that, to scholarship that critically interrogates the representation of fathers in film. Adopting sociological approaches, McNulty Norton makes a compelling argument to the effect that the figure of the failing father in Hollywood family films of the late twentieth and early twenty-first centuries is a structuring trope of the genre, and that this is symptomatic of that period’s ‘re-gendering’ of parenthood.”
—Hannah Hamad, Senior Lecturer of Media and Communication, Cardiff University, UK

“Drawing on detailed analysis of Hollywood films from the 1990s onwards, this engaging book presents a convincing and nuanced argument for the increasing value of authentic father-child relationship on screen: one that relies on a re-gendering rather than de-gendering of parenting.”
—Esther Dermott, Professor and Head of School for Policy Studies, University of Bristol, UK

“This book throws new light on the debate over a crisis in the nature of contemporary Western fatherhood. McNulty Norton brings a penetrating sociological eye to the irresolvable tensions in constructions of fatherhood in film, and illuminates the shifts to statuses of mother and child that are bound up in these portrayals.”
—Rosalind Edwards, Professor of Sociology, University of Southampton, UK

“This book provides an original contribution to scholarship on the contradictory cultural expectations of contemporary fatherhood. McNulty-Norton brilliantly charts the emergence and decline of gender role stereotypes in Hollywood movies in ways that are inflected by race and lays out how expectations of the ‘caregiving father’ have given way to expectations of the ‘intimate father.’”
—Jo Lindsay, Professor of Sociology, Monash University, Australia