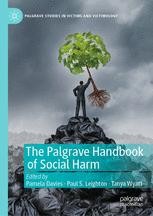 The Palgrave Handbook of Social Harm

This handbook explores the concept of 'harm' in criminological scholarship and lays the foundation for a future zemiological agenda. 'Social harm' as a theoretical construct has become established as an alternative, broader lens through which to understand the causation and alleviation of widespread harm in society, thus moving beyond criminology and state definitions of crime and extending the range of criminological research. Applying zemiological concepts, this book comprehensively explores topics including violence, moral indifference, workplace injury, corporate and state harms, animal rights, migration, gender, poverty, security and victimisation. This definitive work covers theory, research, scholarship and future visions across four sections, and includes contributions from areas such as criminology, sociology, socio-legal and cultural studies, social policy and international relations. It offers readers up-to-date, original theoretical perspectives and an analysis of a broad range of issues from a 'social harm' perspective.

“Davies, Leighton and Wyatt’s compilation is a must read for all scholars and students of criminology. Through its conceptual interrogation of harm and justice, application of novel methods, and focus on the most deleterious forms of harm affecting humans, non-human species and the environment, The Palgrave Handbook of Social Harm brings together scholars who individually and collectively successfully contribute to expanding the frontiers of the discipline in significant and diverse ways” (Professor Christina Pantazis, Professor of Zemiology, University of Bristol, UK)

“In the tradition of Sutherland’s white-collar crime, Davies, Leighton and Wyatt have challenged criminology and victimology to rethink traditional concepts of crime to a harms-based “zemiological” notion of crime as social harm. The contributors explode traditional victimology into a kaleidoscope of collectivities whose lives are punctured by an array of insidious practices in whose intersecting webs we are all enmeshed. Thus, resonant with green criminology and critical animal studies, our environments are polluted, including rivers, forests, plants and ecosystems. Non-human animals are subject to violence in our attempts to harness them for food. The contributors show that criminal justice as currently constituted is powerless to control or correct injustice produced by these systems. This book succeeds in showing the interrelatedness of harm and victimization as a holistic framework, and for that alone it is essential reading” (Stuart Henry, Emeritus Professor of Criminology and Criminal Justice at San Diego State University, USA)

“Though some readers might ponder what criteria we should use when prioritising what harms to reduce and how, and if and when intentional harms by ‘conscious opponents’ should be treated differently in law and by enforcement, The Palgrave Handbook of Social Harm is an important exploration of a range of human, non-human and environmental harms, taking readers well beyond the conventional boundaries of criminology” (Michael Levi, Professor of Criminology, Cardiff University, UK)