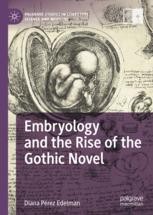 Embryology and the Rise of the Gothic Novel

This book argues that embryology and the reproductive sciences played a key role in the rise of the Gothic novel in the eighteenth and nineteenth centuries. Diana Pérez Edelman dissects Horace Walpole’s use of embryological concepts in the development of his Gothic imagination and provides an overview of the conflict between preformation and epigenesis in the scientific community. The book then explores the ways in which Gothic literature can be read as epigenetic in its focus on internally sourced modes of identity, monstrosity, and endless narration. The chapters analyze Horace Walpole’s The Castle of Otranto; Ann Radcliffe’s A Sicilian Romance, The Italian, and The Mysteries of Udolpho; Mary Shelley’s Frankenstein; Charles Robert Maturin’s Melmoth the Wanderer; and James Hogg’s Confessions of a Justified Sinner, arguing that these touchstones of the Gothic register why the Gothic emerged at that time and why it continues today: the mysteries of reproduction remain unsolved.

Diana Pérez Edelman is Associate Professor of English at the University of North Georgia, Gainesville, USA.

“Foregrounding some of the most canonical and widely studied Gothic and Romantic texts, offering readings that are at once vibrant and new while still somehow familiar in the best possible way, Edelman makes it clear just how fundamental a concern with generation is to any understanding of the period. This work is deeply learned and wonderfully accessible—and profoundly urgent.” (James Robert Allard, Brock University, Canada, and author of Romanticism, Medicine, and the Poet’s Body (2007))

“Edelman argues that contemporary theories of embryology (not yet an empirical science) debate often contradictory concerns about origins, identity, hybridity, and the potential for an infinite number of forms. Gothic narratives express similar anxieties, adapting to popular and high art, changing historical circumstances, and media unimaginable at their birth. Reading the evolution of Gothic in the context of inherently contradictory theories of embryology illuminates the literature’s own contradictions. (Is it conservative or revolutionary? Feminist or misogynist?) Edelman’s learned and cogent exposition of this unexpected biological context will engage not only students of the Gothic tradition, but also the growing audience discovering the material and scientific roots of Romanticism.” (Anne Williams, Professor of English Emeritus, University of Georgia, USA, and author of Art of Darkness: A Poetics of Gothic (1995))