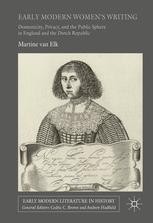 Domesticity, Privacy, and the Public Sphere in England and the Dutch Republic

This book is the first comparative study of early modern English and Dutch women writers. It explores women’s rich and complex responses to the birth of the public sphere, new concepts of privacy, and the ideology of domesticity in the seventeenth century. Women in both countries were briefly allowed a public voice during times of political upheaval, but were increasingly imagined as properly confined to the household by the end of the century. This book compares how English and Dutch women responded to these changes. It discusses praise of women, marriage manuals, and attitudes to female literacy, along with female artistic and literary expressions in the form of painting, engraving, embroidery, print, drama, poetry, and prose, to offer a rich account of women’s contributions to debates on issues that mattered most to them.

Show all
Reviews
“The book is a timely contribution to the growing body of work on the various political and literary connections forged between Britain and the Dutch Republic during this turbulent period of sometimes violent political conflict and debate for both polities. … the book has to offer to scholars and students interested in early modern women's writing or transnational literary cultures more generally.” (Catharine Gray, Early Modern Women Journal, Vol. 14 (1), 2019)
“Van Elk’s well-written and well-documented monograph is an inspiring incentive for more of this kind of research and is highly recommended for anyone interested in transnational relations and early modern female authorship.” (Sophie Reinders, Women's Writing, July, 2018)

“The originality of this work lies in its wide scope. … Those scholars of gender studies and early modern women writers who share this evaluation, and those ready to let themselves be persuaded, should read Early Modern Women’s Writing. At the very least, this study brings Dutch sources under the attention of an international audience by presenting them side by side with their English ‘counterparts’.” (Lotte Fikkers, Journal of the Nothern Renaissance, northernrenaissance.org, February, 2018)
“Martine van Elk’s rich and eclectic study compares Dutch and English women writers working at a time when an ideology of domesticity emerged, with the public and private spheres gradually but irreversibly separating. … Van Elk’s monograph offers an important assessment of how women on both sides of the narrow seas sought public recognition of their artistic skill.” (Nadine Akkerman, Renaissance Quarterly, Vol. 71 (2), 2018)

“Early Modern Women’s Writing … is an important accomplishment because it incorporates the understudied works of Dutch female authors in an argument aimed to intervene in English-language debates. It invites further reading and analysis of all the texts that have been (re-)discovered over the last few decades and relates them to topical research questions on themes such as literature and politics, book history, and self-representation.” (Nina Geerdink, Early Modern Low Countries, Vol. 2 (01), 2018)

“In this groundbreaking and original work, Martine van Elk shows how women writers in early modern Britain and the Dutch Republic navigated the tensions between a new ideology of domesticity and the rise of the public sphere. Addressing important questions about female authorship, Domesticity, Privacy, and the Public Sphere is also a major contribution to comparative  literary criticism.” (Helmer Helmers, Lecturer in Early Modern Dutch Literature and Culture, University of Amsterdam, Netherlands)