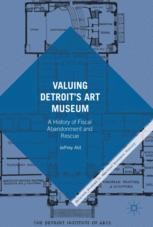 A History of Fiscal Abandonment and Rescue

This book explores the perilous situation that faced the Detroit Institute of Arts during the city's bankruptcy, when creditors considered it a "nonessential asset" that might be sold to settle Detroit's debts. It presents the history of the museum in the context of the social, economic, and political development of Detroit, giving a history of the city as well as of the institution, and providing a model of contextual institutional history.

Abt describes how the Detroit Institute of Arts became the fifth largest art museum in America, from its founding as a private non-profit corporation in 1885 to its transformation into a municipal department in 1919, through the subsequent decades of extraordinary collections and facilities growth coupled with the repeated setbacks of government funding cuts during economic downturns. Detroit's 2013 bankruptcy underscored the nearly 130 years of fiscal missteps and false assumptions that rendered the museum particularly vulnerable to the monetary power of a global art investment community eager to capitalize on the city's failures and its creditors' demands.
This is a remarkable and important contribution to many fields, including non-profit management and economics, cultural policy, museum and urban history, and the histories of both the Detroit Institute of Arts and the city of Detroit itself. Despite the museum's unique history, its story offers valuable lessons for anyone concerned about the future of art museums in the United States and abroad.

Jeffrey Abt is Professor at Wayne State University in Detroit, USA. He has written two previous books, A Museum on the Verge: A Socioeconomic History of the Detroit Institute of Arts, 1882-2000 and American Egyptologist: The Life of James Henry Breasted and the Creation of His Oriental Institute. Abt is also co-editor of the Museum History Journal.

“Jeffrey Abt’s gripping account of the Detroit Art Institute’s 130 year history culminating with its near-demise in the wake of the city’s 2013 bankruptcy is a stirring tale in which against all odds democracy triumphed over predatory creditors and a global art market itching to monetize the institute’s priceless collection. Obligatory reading for anyone concerned about the fate of the American art museum in the twenty-first century.” (Alan Wallach, The College of William and Mary, USA)

“Jeffrey Abt gives a gripping account of the battle that raged around the celebrated holdings of the Detroit Institute of Arts after the city filed for bankruptcy in 2013. In the museum were hugely valuable works by Van Gogh, Picasso and Breughel, as well as tens of thousands of other works. Abt recounts how demands for the art to be sold were fought off and how a “grand bargain” was thrashed out, saving the collections for the city and for future generations.” (Georgina Adam, Art market journalist for The Art Newspaper and The Financial Times)

“An outstanding work of scholarship and analysis. Jeffrey Abt is the foremost expert on the history of the Detroit Institute of Arts.” (Bruce J. Altshuler, New York University, USA)

“Jeffrey Abt’s strangely gripping story of one museum’s, and one city’s, financial struggles is brilliantly told. Why this richly detailed case matters not only for what is now called the Detroit Institute of Arts becomes abundantly clear in his deft account. For the struggle is also over the nature of civic property, the implications of public versus private ownership, how art should be displayed, to whom it belongs, how it is valued. As he shows, these are all entangled together in ways often unnoticed by observers. For this reason, this is a story that those all those interested in the politics of museums, art and the cultural life of cities should be sure to read.” (Sharon Macdonald, Humboldt University of Berlin, Germany)