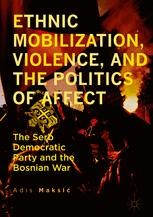 Ethnic Mobilization, Violence, and the Politics of Affect

The Serb Democratic Party and the Bosnian War

This book offers an unprecedented account of the Serb Democratic Party’s origins and its political machinations that culminated in Europe’s bloodiest conflict since World War II. Within the first two years of its existence, the nationalist movement led by the infamous genocide convict Radovan Karadzic, radically transformed Bosnian society. It politically homogenized Serbs of Bosnia-Herzegovina, mobilized them for the Bosnian War, and violently carved out a new geopolitical unit, known today as Republika Srpska. Through innovative and in-depth analysis of the Party’s discourse that makes use of the recent literature on affective cognition, the book argues that the movement’s production of existential fears, nationalist pride, and animosities towards non-Serbs were crucial for creating Serbs as a palpable group primed for violence. By exposing this nationalist agency, the book challenges a commonplace image of ethnic conflicts as clashes of long-standing ethnic nations.

Adis Maksic is Head of the Department of International Relations and European Studies at International Burch University in Sarajevo, Bosnia. He has also served in several peacekeeping missions in the Balkans.

“The book is highly innovative in the way it brings together discourse analysis, insights from cognitive science and psychology and carefully researched empirical data to produce an account of how the SDS, led by Radovan Karadžić, was able to attract the bulk of Serb votes … . This is an essential book for anyone interested in the Bosnian war, but also important for anyone studying the dynamics of ethnic conflict, nation formation and the idea of nation as discourse.” (Sarah Correia, LSE Review of Books, blogs.lse.ac.uk, December, 2017)

“This pioneering work offers a new understanding of the sources of violent Serbian separatism in Bosnia and Herzegovina in the 1990s as well as the origins of ethnonational conflict globally.  Drawing ably upon contemporary political science theory, Adis Maksic convincingly attributes Serbian ethnic violence to a synergistic combination of leadership agents relentlessly pursuing political change, widespread mobilization of material and human resources, and a carefully wrought narration of the Serb people’s past and present.” (Robert Donia, Research Associate, University of Michigan, USA)

“Why did Bosnia-Herzegovina, a land of peaceful coexistence, descent into violent ethnic cleansing seventeen months after its first multi-party elections? Central to any answer are the actions of the Serb Democratic Party, the party of Radovan Karadžić. In this path-breaking book Adis Maksic argues that affective appeals and performances fueled this party's rise into power and thereafter towards the destruction of Bosnia. Songs, music and marches made ethnic cleaning possible.” (Gerard Toal, Professor of Government and International Affairs, Virginia Tech, USA)