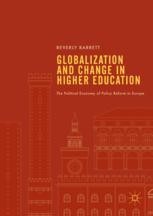 Globalization and Change in Higher Education

This book sets out political economy explanations for higher education policy reform in Europe in the initial decades of the 21st century. With a sustained focus on the national level of policy implementation, institutional change is considered in relationship to broader trends in economic development and globalization. Since the concept of a “Europe of Knowledge” was presented by the European Commission in 1997, the pursuit of global competitiveness sets the context for the international initiative of the Bologna Process that has created the European Higher Education Area (EHEA). Growing from 29 to 48 participating countries, there are three core explanations for change in the policy process: globalization (economic), intergovernmentalism (political), and Europeanization (social). As part of multi-method research analysis, this book presents qualitative case studies on Portugal and Spain to consider points of comparison, including national governance history and modernization of higher education institutions. The structure of government in these countries affects the policy reforms. Ultimately, the Bologna Process serves as a model for integration of higher education reform in other world regions. This book is essential reading for students, researchers, and policy makers in the fields of education, economics, and public policy.

Beverly Barrett is Lecturer at the Cameron School of Business at the University of St. Thomas, USA.  Her research focuses on regional integration, international trade, governance, and higher education policy. She was Visiting Faculty in International Business at UDLAP (Universidad de las Américas Puebla), a US-accredited university in Mexico. Prior to this she was Visiting Assistant Professor and Lecturer in Global Studies at the Bauer College of Business and at the Hobby School of Public Affairs at the University of Houston.

“Barrett’s Globalization and change in higher education offers an insightful approach of higher education policymaking in Europe and, for this reason, can be an enriching read for students, researchers, policy analysts and decision-makers holding a keen interest in internationalization, higher education and public policy.” (Rodolfo Benites, European Journal of Higher Education, April, 2018)

“Globalization and Change in Higher Education: The Political Economy of Policy Reform in Europe focuses on educational reform in Europe, especially in the EU, within the context of the Bologna Process.  The study makes an important contribution to our understanding of the politics of educational reform. It not only examines the broad thrust of change in higher education across Europe, but also includes careful case studies of reform in both Spain and in Portugal. Anyone interested in higher education in Europe will find this book essential reading.” (Roger E. Kanet, Professor Emeritus, University of Miami and University of Illinois at Urbana-Champaign, USA)
“The European Higher Education Area was declared fully implemented in 2010 but there is still a strong demand for critical analyses of its consequences and level of implementation. This book presents an original contribution by using political economy to analyse the implementation of the Bologna process in two distinct European countries with substantial differences in its level of centralisation of higher education administration.” (Alberto Amaral, University of Porto and CIPES, Portugal)

“Explains how the processes of globalization, intergovernmentalism, and Europeanization have shaped higher education in Europe. A careful analysis reveals how the changes in higher education complement the Single Market and are shaping the region in the 21st century.” (David W. Ellwood, Johns Hopkins University SAIS Europe)

“This closer look at the Iberian countries reveals the importance of the Bologna Process to modernize higher education in Portugal and in Spain, which has a unique government structure with its autonomous communities. These changes in higher education also influence the Ibero-American countries, and those beyond, as they pursue competitiveness in the global knowledge-based economy today and in the future.” (Miguel Ángel Fernandez de Mazarambroz, Retired Ambassador of the Kingdom of Spain)