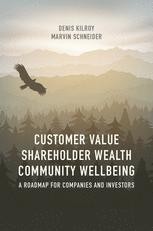 A Roadmap for Companies and Investors

This book provides a roadmap for leaders of listed companies to follow in order to build enduring institutions that create value for customers and wealth for shareholders on an ongoing basis, in ways that also enhance the wellbeing of all other legitimate stakeholders – including the wider community and the environment.

Customer Value, Shareholder Wealth, Community Wellbeing is an inspirational work that confirms the very positive role that a more expansive, more inclusive and more conscious approach to business, can play within our society.

It incorporates a breakthrough in understanding in applied corporate finance and business economics centred on the Bow Wave of Expected Economic Profits.  This construct provides an economic underpinning for a new and more socially responsible business paradigm – demonstrating for the first time exactly how the performance produced by management in the market for their company’s products and services, translates into the capital market outcomes experienced by shareholders.

Denis Kilroy and Marvin Schneider are both career management consultants.  They met at value-based management pioneers Marakon Associates in the early 1990s, where Denis was a Partner and Marvin was a freshly-minted MBA.  Between them, they have more than fifty years’ experience advising the leadership teams of listed companies in Australasia, Europe and North America.

It was at Marakon that Denis began to develop the idea of adopting customer value creation and shareholder wealth creation as joint and mutually reinforcing objectives that could be pursued in tandem, in a way that also enhanced the wellbeing of the other stakeholders in a listed company. He left Marakon in 1994 in order to pursue this line of thinking.  In his new firm KBA, he was often told by clients that the ideas that he was working with were way ahead of their time.

Marvin joined Denis at KBA in 2003, where they collaborated for a number of years on the first attempt to bring the EP Bow Wave concept to life.  But the market was not ready.   They revisited the initiative in 2011 and over the next four years, completed the development of the EP Bow Wave construct, incorporating TSR Alpha and the Pair of EP Bow Waves.