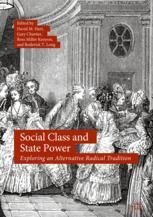 This book explores the idea of social class in the liberal tradition. It collects classical and contemporary texts illustrating and examining the liberal origins of class analysis—often associated with Marxism but actually rooted in the work of liberal theorists. Liberal class analysis emphasizes the constitutive connection between state power and class position. Social Class and State Power documents the rich tradition of liberal class theory, its rediscovery in the twentieth century, and the possibilities it opens up for research in the new millenium.

“This book is an absolute treasure trove of mostly forgotten writings analyzing the phenomena of class, social power, and exploitation. The perspective these writings offer on the nature of politics is surprising, provocative, and highly illuminating.” (Matt Zwolinski, University of San Diego, USA)

“This magnificent new compendium of writings by a broad range of leading thinkers from the past three centuries sets the record straight about the true origins and development of class analysis and its continuing and central importance to political and social theory.” (Joseph Salerno, Pace University, USA)

“This collection makes clear that the idea of class conflict did not originate with Marx but emerged from the liberal tradition, of which it was a central element. Class analysis centered on the division between the productive classes and those who gain rents by using political power, underscores the reality that increasing state power will actually increase class division and exploitation rather than supplanting it.” (Stephen Davies, Institute for Economic Affairs, UK)

“This reader presents classic and modern works centered on a common theme: how have the political mechanisms of the state intruded upon the distributional outcomes of a free and open society? This multifaceted survey traces the history of state predation through the works of the English Levelers, the Scottish Enlightenment, classical economists, American individualist anarchists, and current libertarian thinkers. The selected readings display remarkable intellectual diversity and often approach the subject of class and the state from distinct and sometimes contrasting angles. Readers of all intellectual backgrounds will find fresh insights from the overlooked classical perspectives presented in this accessible volume.” (Phillip W. Magness, George Mason University, USA)