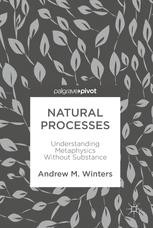 “Winters (Slippery Rock Univ.) argues that process metaphysics, a competitor to substance metaphysics largely marginalized in mainstream analytic philosophy, deserves more attention as an alternative framework for approaching natural explanation. … Summing Up: Recommended. Upper-division undergraduates through faculty.” (D. A. Forbes, Choice, Vol. 55 (9), May, 2018)
“Metaphysical theorizing has traditionally been dominated by the use of substances as a crucial device to formulate and implement philosophical views. But how far can a substance metaphysics actually go? In this important and refreshing work, Andrew Winters critically assesses the prospects of one of the most influential philosophical traditions in history, and argues that, when considered closely enough, its use of substance is seriously defective. He then paves the way to the development of a metaphysics without substances, indicating the crucial role played by processes instead. A tour de force!” (Otávio Bueno, Professor of Philosophy, University of Miami, USA)

“What sort of metaphysics is appropriate for modern science? Drawing on developments in both physics and biology, Winters argues that process metaphysics does a better job in this regard than the more traditional substance-based alternative. Such proposals have famously suffered in the past from conceptual obscurity but here Winters brings both an admirable clarity and a nuanced philosophical perspective to bear while also nicely situating the relevant issues in their historical context. He also looks to the future in setting out possible new directions and makes a compelling case for his ‘attenuated methodological naturalism’ when it comes to metaphysics. This is an exciting new work that will be of interest not only to advocates of process metaphysics but to anyone who has reflected on the relationship between science and metaphysics in general.” (Steven French, Professor of Philosophy of Science, University of Leeds, UK)