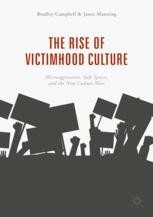 The Rise of Victimhood Culture

The Rise of Victimhood Culture offers a framework for understanding recent moral conflicts at U.S. universities, which have bled into society at large. These are not the familiar clashes between liberals and conservatives or the religious and the secular: instead, they are clashes between a new moral culture—victimhood culture—and a more traditional culture of dignity. Even as students increasingly demand trigger warnings and “safe spaces,” many young people are quick to police the words and deeds of others, who in turn claim that political correctness has run amok. Interestingly, members of both camps often consider themselves victims of the other. In tracking the rise of victimhood culture, Bradley Campbell and Jason Manning help to decode an often dizzying cultural milieu, from campus riots over conservative speakers and debates around free speech to the election of Donald Trump.

Selected by Choice magazine as an Outstanding Academic Title for 2018

“Comprehensive, measured, and well researched, this may be the most important book of the year. Period. … The authors do a masterful job of explaining the nation’s shift from a culture of honor, to a culture of dignity, to one of victimhood. … Required reading for those seeking to move beyond the seeming downward spiral of becoming a nation of victims.” (J. R. Mitrano, Choice, Vol. 56 (1), September, 2018)

“Sociologists Bradley Campbell and Jason Manning have produced the first systematic theoretical analysis of the moral culture of “victimhood” emerging on university campuses. … This book is an important addition to the sociology of morality in its documentation of the contours of a newly emerging moral culture.” (Kevin Mccaffree, skeptic.com, February, 2018)
“Campbell and Manning are prophets of the academic world. They correctly diagnosed the first outbreaks of a new moral culture of victimhood in 2014, before most of us had even heard of ‘microaggressions.’ The rapid changes in campus culture since then have validated their analysis. In this important book, Campbell and Manning give everyone the sociological tools they need, in easy and accessible language, to understand and perhaps reverse the pull of victimhood culture, which is now spreading beyond universities into corporate America and the broader American public square.” (Jonathan Haidt, Thomas Cooley Professor of Ethical Leadership, NYU-Stern School of Business, USA, and author of The Righteous Mind)

“A book of revelations! Sociologists Bradley Campbell and Jason Manning provide both a comprehensive overview and surgically precise analysis of what many will find a new and possibly shocking style of modern morality—a ‘culture of victimhood’—that ever more aggressively dominates discourse and silences the free exchange of ideas in American academic life. The book will reward any reader with a rare experience: a consistently creative and stunningly insightful theory supported by a rich array of captivating empirical illustrations. Anyone with even a casual interest in the conflict and tension that increasingly pervade and politicize the atmosphere of today’s colleges and universities will surely feast on every chapter of this book.” (Donald Black, University Professor Emeritus of Social Sciences, University of Virginia, USA, and author of Moral Time and The Behavior of Law)