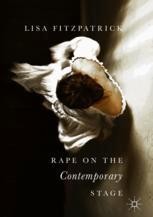 Rape on the Contemporary Stage

This book investigates the representation of rape in British and Irish theatre since the second wave of the Women’s Movement. Mainly focusing on the period from the 1990s to the present, it identifies key feminist debates on rape and gender, and introduces a set of ideas about the function of rape as a form of embodied, gendered violence to the analysis of dramaturgical and performance strategies used in a range of important and/or controversial works. The chapters explore the dramatic representation of consent; feminist performance strategies that interrogate common attitudes to rape and rape survivors; the use of rape as an allegory for political oppression; the relationships of vulnerability, eroticism and affect in the understanding and representation of sexual violence; and recent work that engages with anti-rape activism to present women’s personal experiences on stage.

​Lisa Fitzpatrick is Senior Lecturer in Drama in the School of Arts and Humanities, University of Ulster, UK. She is a founding member of the Irish Society for Theatre Research, and the editor of Performing Feminisms in Contemporary Ireland (2013), Performing Violence in Contemporary Ireland (2010), Le théâtre irlandais au carrefour des modernités (Annuaire théâtral, 40), and Pre-, Past-, and Neo- Colonialisms: Wole Soyinka and Contemporary Theatre (Modern Drama, 45:3, 2002).

“Graduate students, scholars and professionals interested in gender representation in media might find this book useful to better understand how gender representations manifest themselves in media such as theatre.” (Morgan Danker, CBQ Communication Booknotes Quarterly, Vol. 51 (3-4), 2020)

“This authoritative, theoretically deep and wide-ranging book demands that its audience ask the important question: What are the ethics and aesthetics of representing rape on stage? With an overview of historical representations of rape, and analysis of different critical perspectives on this history, Fitzpatrick directs her scrutiny to contemporary theatre – as well as culture more broadly – to consider this most politically charged and relevant problem. Situating the works under discussion in context, each of the chapters considers issues of silencing, the metaphorisation of rape and women’s bodies, the influence of race and class on the narrativisation of rape, the erasure of women’s experience and subjectivity, and, finally, acts of resistance and activism. This book is a major addition to feminist theatre criticism, and to discussions of performing gender.  We are lucky to have such a volume appearing now, and most of all to have someone with Fitzpatrick’s acuity writing about rape on the contemporary stage.” (Emilie Pine, Associate Professor in Modern Drama, University College Dublin, Ireland)