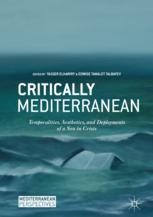 Temporalities, Aesthetics, and Deployments of a Sea in Crisis

Traversed by masses of migrants and wracked by environmental and economic change, the Mediterranean has come to connote crisis. In this context, Critically Mediterranean asks how the theories and methodologies of Mediterranean studies may be brought to bear upon the modern and contemporary periods. Contributors explore how the Mediterranean informs philosophy, phenomenology, the poetics of time and space, and literary theory. Ranging from some of the earliest twentieth-century material on the Mediterranean to Edmond Amran El Maleh, Christoforos Savva, Orhan Pamuk, and Etel Adnan, the essays ask how modern and contemporary Mediterraneans may be deployed in political, cultural, artistic, and literary practice. The critical Mediterranean that emerges is plural and performative—a medium through which subjects may negotiate imagined relations with the world around them. Vibrant and deeply interdisciplinary, Critically Mediterranean offers timely interventions for a sea in crisis.

“Here at long last is a stunning set of critical essays and meditations that fills the void in Mediterranean Studies as currently practiced. As an ensemble, the volume engages the major conundrum of this field— the time-space-modernity nexus that has until now sundered the Sea along historical and historicist fault lines. In their prolegomena, the editors, elhariry and Talbayev, bring the pre-modern scholarship into conversation with the aesthetic, philosophical, and literary production of the modern and contemporary periods.” (Julia Clancy-Smith, Regents Professor, Department of History, University of Arizona, USA)

“In its innovative interdisciplinary and transcultural approach this lively collection of writings brings us to the heart of the Mediterranean as an evolving critical concept and historical challenge. The multiplication of prospects and temporalities propose a constellation that remains irreducible to a single order of time and telling. Pushing the existing order of explanation out of joint, the Mediterranean here becomes the critical site and cultural promise of an altogether more significant historicity.” (Iain Chambers, Professor of Cultural and Postcolonial Studies of the Mediterranean, Università di Napoli, Orientale, Italy)

“Critically Mediterranean is an outstanding collection of essays.  Transnational and cross-disciplinary, it refocuses fundamental issues of Mediterranean studies—mobility, interconnectedness, multiple or layered temporalities—on the modern and contemporary periods, demonstrating the importance of the Mediterranean for interrogating key concepts of modernity.  At the same time, it makes a compelling case for the centrality of the modern and contemporary periods in defining the concept of ‘Mediterranean.’  A timely and valuable contribution to the field of Mediterranean studies.” (Michele Hannoosh, Professor of French, University of Michigan, USA)