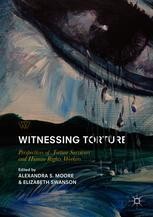 This book demonstrates a new, interdisciplinary approach to life writing about torture that situates torture firmly within its socio-political context, as opposed to extending the long line of representations written in the idiom of the proverbial dark chamber. By dismantling the rhetorical divide that typically separates survivors’ suffering from human rights workers’ expertise, contributors engage with the personal, professional, and institutional dimensions of torture and redress. Essays in this volume consider torture from diverse locations – the Philippines, Argentina, Sudan, and Guantánamo, among others. From across the globe, contributors witness both individual pain and institutional complicity; the challenges of building communities of healing across linguistic and national divides; and the role of the law, art, writing, and teaching in representing and responding to torture.

Alexandra S. Moore is Professor of English and Associate Director of the Human Rights Institute at Binghamton University, USA. Her publications include Vulnerability and Security in Human Rights Literature and Visual Culture (2015) and Regenerative Fictions: Postcolonialism, Psychoanalysis, and the Nation as Family (2004). She has also co-edited several volumes and a special journal issue: The Routledge Companion to Literature and Human Rights (with Sophia A. McClennen, 2015); Teaching Human Rights in Literary and Cultural Studies (with Elizabeth Swanson Goldberg, 2015); Globally Networked Teaching in the Humanities (with Sunka Simon, 2015); Theoretical Perspectives on Human Rights and Literature (with Goldberg, 2011), and Human Rights and Cultural Forms, special issue of College Literature (with Goldberg and Greg Mullins, 2013).

Elizabeth Swanson is Professor of English at Babson College, USA, and has published widely on the subject of literature and human rights. Author of Beyond Terror: Gender, Narrative, Human Rights (2007), she is co-editor, with Alexandra Schultheis Moore, of Theoretical Perspectives on Literature and Human Rights (2011) and Options for Teaching Human Rights in Literary and Cultural Studies (2015), and with James Brewer Stewart of Human Bondage and Abolition: New Histories of Slavery Past and Present (2018). She has been a human rights activist since age 14, when she wrote her first letter for Amnesty International, and has for the past ten years worked with survivors of sex trafficking and gender-based violence in southeast Asia to create dignified, sustainable, life and livelihood solutions.

“I would strongly recommend this book to anyone working in the field of life narrative. … I am very glad that I did, because it forced me to shift my understanding of the work that I do—for the better, I hope.”  (Annie Pohlman, Biography, Vol. 42 (4), 2019)