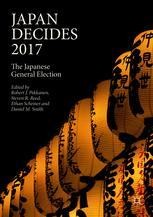 This third volume in the Japan Decides series remains the premier venue for scholarly research on Japanese elections. Putting a spotlight on the 2017 general election, the contributors discuss the election results, party politics, coalition politics with Komeito, the cabinet, constitutional revision, new opposition parties, and Abenomics. Additionally, the volume looks at campaigning, public opinion, media, gender issues and representation, North Korea and security issues, inequality, immigration and cabinet scandals. With a topical focus and timely coverage of the latest dramatic changes in Japanese politics, the volume will appeal to researchers and policy experts alike, and will also make a welcome addition to courses on Japanese politics, comparative politics and electoral politics.

Robert J. Pekkanen is Professor at the University of Washington, USA.  He has published nine books on politics, most recently co-editing The Oxford Handbook of Electoral Systems (2018), as well as articles in the American Political Science Review, the British Journal of Political Science and Comparative Political Studies.

Ethan Scheiner is Professor of Political Science at the University of California, Davis, USA. He is the author of Democracy Without Competition in Japan: Opposition Failure in a One-Party Dominant State (2005) and Electoral Systems and Political Context: How the Effects of Rules Vary across New and Established Democracies (with Robert G. Moser, 2012), as well as a variety of journal articles.

Daniel M. Smith is Associate Professor of Government at Harvard University, USA. He is the author of Dynasties and Democracy: The Inherited Incumbency Advantage in Japan (2018) and numerous articles and book chapters on political parties and elections.

“Japan Decides 2017 is an excellent book for those who are interested in a snapshot of the most recent Japanese elections. As the third book in a series on Japanese election it is a valuable addition to our understanding of why the same party almost always wins in Japan.” (Ronald J Hrebenar, Party Politics, Vol. 26 (6), 2020)
“The series is a boon for research and teaching, but should also prove useful for foreign policy professionals and political risk consultants. Indeed, anyone with an interest in Japanese politics would benefit from reading the invaluable Japan Decides 2017 and its companion volumes.” (Gregory W. Noble, Pacific Affairs, Vol. 93 (1), 2020)
“I would highly recommend this book to experts and students alike. This new volume, and the whole series, is fast becoming central to the study of Japanese elections.” (Gill Steel, Japanese Journal of Political Science, Vol. 20 (2), June, 2019)