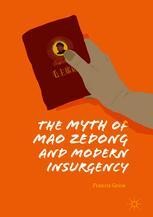 The Myth of Mao Zedong and Modern Insurgency

Tackling one of the most prevalent myths about insurgencies, this book examines and rebuts the popular belief that Mao Zedong created a fundamentally new form of warfare that transformed the nature of modern insurgency. The labeling of an insurgent enemy as using “Maoist Warfare” has been a common phenomenon since Mao’s victory over the Guomindang in 1949, from Malaya and Vietnam during the Cold War to Afghanistan and Syria today. Yet, this practice is heavily flawed. This book argues that Mao did not invent a new breed of insurgency, failed to produce a coherent vision of how insurgencies should be fought, and was not influential in his impact upon subsequent insurgencies. Consequently, Mao’s writings cannot be used to generate meaningful insights for understanding those insurgencies that came after him. This means that scholars and policymakers should stop using Mao as a tool for understanding insurgencies and as a straw man against whom to target counterinsurgency strategies.

“The Myth of Mao is a work of great insight and originality, a bold, iconoclastic thrust into the insurgency-counterinsurgency literature that has proliferated in recent years, as well as a challenge to the traditional myth of the foundations of Communist China. Incredibly, it seems, until now few had bothered to check whether Mao deserves his laurels as an insurgency guru proffering gifts for would-be rebels and cautionary lessons for would-be suppressors. It turns out that he was no visionary, failing himself to apply ‘Maoist’ principles but managing to fool succeeding generations. At last, we now have a comprehensive study written by someone who has actually read what he said, studied what he did, and succinctly made sense of what it all means. Finally, Mao’s bluff has been called.” (Ashley Jackson, Professor of Imperial and Military History, Defence Studies Department, King's College London, and Visiting Fellow, Kellogg College Oxford, UK)

“In this provocative and brilliantly argued book, Francis Grice challenges the idea of Mao as a landmark innovator in guerrilla warfare. Through close analysis of Mao’s voluminous writings, Grice punctures his reputation as an original thinker, and critiques his influence on later generations of insurgents. This is a major contribution to the scholarly literature on insurgencies, and a convincing, sustained assault on the myth of Mao.” (Kenneth Payne, Senior Lecturer, King's College London, and Senior Member, St Antony's College, Oxford, UK)

“Through meticulous research and incisive analysis, Francis Grice presents an evocative account of Maoist teachings in the context of insurrectionary warfare. Grice uproots existing and often overstated accounts of the role and significance that Mao played in writing the recipe for successful modern insurgency. From the Chinese Revolutionary Civil War, Grice extends the prism of analysis about the impacts of Maoist teachings to wars of rebellion in distant theaters. This book compels scholars and readers of general interest alike to undertake a profound rethink of the impact that Maoist thought has had on subsequent violent and anti-authority efforts that have taken place since the early 20th century.” (Scott N. Romaniuk, editor of Insurgency and Counterinsurgency in Modern War)