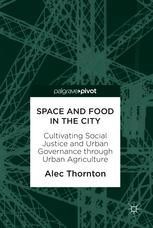 Space and Food in the City

Urban social movements are influential agents in shaping cityscapes to reflect values and needs of communities. Alongside urban population growth, various forms of urban agriculture activity, such as community and market gardens, are expanding, globally. This book explores citizens’ ‘rights to city’ and alternative views on urban space and the growing importance of urban food systems.

Alec Thornton is a Senior Lecturer in Geography at the University of New South Wales, Australia. He has a PhD in Development Studies (Sussex, UK). He is Research Associate at the School of Tourism and Hospitality, University of Johannesburg. His research takes a critical approach to rural and urban agriculture in developed and developing countries.

“Urban agriculture has been viewed by its supporters as one of the key means of improving the food security of marginalised city-based communities throughout the world. In this well-researched and provocative book Alec Thornton argues, however, that – in seeking to create new food futures - urban activism is largely thwarted under conditions of neoliberalism in the global North. In the global South, poor governance structures place a fetter on what can be achieved by local communities. Thornton argues that a much stronger culture of urban activism will be a crucial catalyst for the growth of urban agriculture. The book will be of interest to agri-food researchers, urban community activists, policy makers and a host of others committed to pursuing social equity and food justice.” (Geoffrey Lawrence PhD, FASSA, Emeritus Professor of Sociology, University of Queensland, Australia)